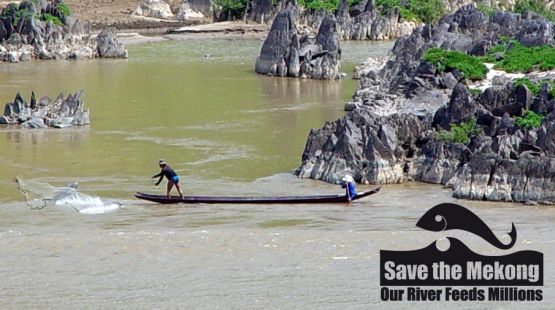 The Don Sahong Dam imperils a critical and ecologically unique area of the Mekong River, known for its aquatic biodiversity and rich fisheries. The Hou Sahong Channel on which the Don Sahong Dam would be built is one of the main pathways in the Mekong used year-round by fish migrating between Cambodia, Thailand, Laos and Vietnam. At least 100 species are known to pass through the channel. Blocking the Hou Sahong Channel will have an irreversible impact on fish migration, and consequently on food and livelihood security throughout the Mekong.

The Environmental Impact Assessment for the Don Sahong Dam fails to properly address the threat to regional fisheries. Despite the project being located less than two km from Cambodia; the transboundary impacts of the project have not been adequately considered or assessed.

Construction and operation of the Don Sahong Dam will require a significant change in the hydrology of the area, increasing the Mekong River’s dry season flows through the Hou Sahong Channel from 4% to 50%. Such changes would affect the renowned Khone Phapheng Falls and also threaten the globally protected wetlands at the Stung Treng Ramsar site, downstream in Cambodia.

The proposed mitigation measures, upon which the project’s success hinges, have never been tested in the Mekong Region. Regional experts have expressed fears that these measures will not be sufficient to mitigate the loss of the Hou Sahong Channel for fish migration. The studies that have been made public by project developers fail to take into account the rich diversity of fish species in the area, each with unique characteristics and migration patterns. Without sufficient baseline data concerning the fish species that migrate up each channel in the Khone Falls area it is not possible to predict what the true impacts of the Don Sahong Dam will be in both Laos and the region. Furthermore, the project developers have not provided information identifying which species the mitigation measures will target or how the design of the channels has been chosen to mitigate the impacts on each species’ migration patterns. The decisions that have been made about the design and operation of the Don Sahong Dam are therefore based on assumptions which gamble with the future of the Mekong River and her people.

There is too much at stake to take such a gamble.

In a letter sent to the Mekong Prime Ministers on September 10, 2014, the Save the Mekong Coalition raised concerns about the legitimacy of the Prior Consultation process for the Don Sahong Dam. We have stressed that no projects, including the Don Sahong Dam, should be submitted for review until critical flaws in the Prior Consultation process that were revealed during the assessment of the Xayaburi Dam are first addressed and until adequate studies, including the Council and Delta Study, have been completed and made public. In the same letter, the Save the Mekong Coalition put forward recommendations for minimum criteria, based on international standards, to enable a participatory and transparent consultation process, which include the need for meaningful consultation to take place before the decision to proceed with a project and require that the process and standard for consultations be the same throughout the region to ensure that the concerns of all countries are raised, recorded and considered equally. It is now clear that these basic requirements have not been met within the national consultations currently underway in Cambodia and Thailand.

The Don Sahong Dam’s Prior Consultation process must not be used as a way for Laos to legitimize its actions under the 1995 Mekong Agreement, but instead it should demonstrate a commitment to regional decision-making in good faith, and in the spirit of the Mekong Agreement. It is critical that decisions related to development on the Mekong River mainstream are based on agreement between all four MRC member countries, and most importantly, by the millions of people in the region who depend upon the river, its biodiversity and its resources.

The Mekong River is an iconic ecosystem of global importance that supports lives and livelihoods in four countries. Central to the Mekong and her people is the role of the region’s rich fisheries. The likely impacts from the Don Sahong Dam on fish migration and the productivity of these fisheries pose an unacceptable risk to food security, lives, livelihoods and the health of millions of people. Furthermore the failures of regional cooperation and unequal costs that will be borne throughout the Mekong River Basin threaten the economic and political stability of the region. A precautionary approach is essential to sustain present and future generations who depend on the Mekong River. Efforts must be made by regional leaders to move towards improved energy planning and more sustainable energy options to ensure the future of the Mekong.

The risks posed by the Don Sahong Dam are avoidable. We therefore call on the Lao government to immediately cancel the Don Sahong Dam, and for the Cambodian, Thai and Vietnamese governments to take necessary actions to uphold their own responsibilities towards the protection of the Mekong River and its people. Together, the Mekong leaders must take immediate steps to improve regional cooperation and to ensure the long-term protection of the vital resources within the Mekong River.