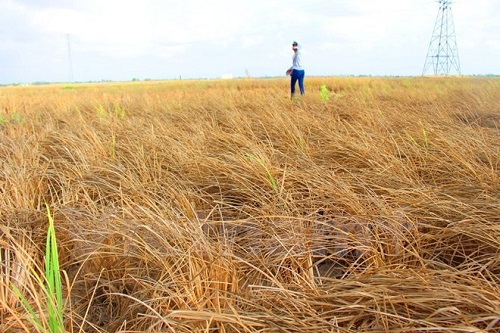 Along with the El Nino, projects in the Mekong River’s upstream, including hydropower plants, water-diverting and water-use works, are likely to pose serious impacts to the Mekong Delta, heard a conference held by the People and Nature Reconciliation in Hanoi on July 20.

According to a report by the People and Nature Reconciliation, Thailand has started water pumping in Nongkhai and Loei provinces since early this year. However, these are only small works included in the country’s large-scale water-diverting plan which has numerous projects.

Meanwhile, neighbouring Cambodia is also diverting water by investing in irrigation works to take or keep water from the river for farming.

Nguyen Nhan Quang, former Deputy General Secretary of the Vietnam National Mekong Committee, who is an independent expert on the river basin management, said that Thailand has the highest number of irrigation works with 6,388 works. Its irrigated land area is only second to Vietnam , he said.

Thailand is planning 990 projects in the northeastern region, mainly to pump water from the Mekong River .

At the same time, Cambodia is investing in the construction of a canal system, mostly in the Mekong basin, said Quang, adding that the total irrigated area in Cambodia is 504,245 hectares and will be expanded to 722,499 hectares by 2030.

In Vietnam , the area is nearly 1.92 million hectares, accounting to 48 percent of the total irrigated land in the Mekong basin.

Under the development scenario to 2030, 339 irrigation work swill be built in the Sesan and Srepok rivers’ basin (tributaries of the Mekong ) which covers 125,165 hectares, noted Quang.

According to Nguyen Hong Toan, an expert from the Vietnam National Mekong Committee, the Mekong Delta region would be threatened by Cambodia ’s planned dams’ construction.

He pointed to the need for members of the Mekong River Commission’s members to cooperate and share information of the river’s water resources.

Dang Thi Ha Giang, a specialist from the Institution of Water, Irrigation and Environment, held that all water diverting projects should be carefully calculated with agreement among parties.

In the 2015-2016 dry seasons, the Mekong River downstream region and Mekong Delta region in Vietnam in particular, experienced historic drought and saltwater intrusion that seriously affected agricultural production and socio-economic activities in the area.