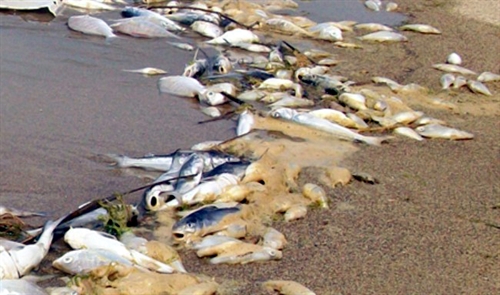 The recent massive fish deaths and waste water discharge in the central coastal region have demonstrated that industrial waste management is a worrisome problem, an official told a workshop held yesterday in Ha Noi.

Even within a similar management body, there existed different judgments about whether FHS should have been permitted to release wastewater through underground pipes, Vo said.

“In this case FHS was allowed to do so, so what happened if the management body failed to oversee the waste dumped into the environment?” he said, quoted by Vietnamplus.

“It was projected that wastewater from the project would flow into the Quyen River, but later it was released into the sea. Did the Ha Tinh Department of Natural Resources and Environment supervise the plant construction?”

Prof. Vo noted that though the official cause of the mass fish deaths had yet to be released, the public suspected that steel and thermo-electricity projects based next to the sea would have a direct impact on the sea water.

Deputy head of the Ministry of Industry and Trade’s Chemical Department, Nguyen Xuan Sinh, said legal regulations and tools to supervise the environment were highly available, but the actual work remained limited.

“In the case related to Formosa, I think we need the environment police or local people to act as intermediary,” he said.

In regard to environment planning, Sinh said quite a few localities were ignoring approved planning to sign and approve projects that are not included in the planning.

From the perspective of an environment management body, former deputy head of the Ministry of Natural Resources and Environment’s Pollution Control Department Tran The Loan  said the environment-monitoring tools failed to assess the environmental capacity in each region.

“A region might be able to accommodate a plant, but the addition of one more plant might damage the environmental capacity thereafter,” Loan said.

He added that the illegal and stealthy discharge of waste was true and the cases detected were lower than what actually occured.

“The practice depends on business ethics and responsibility towards the community.”