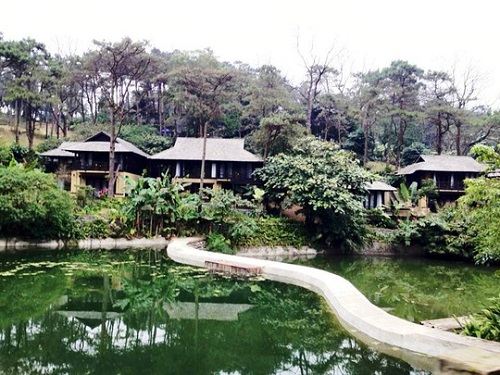 Road building projects that would pass through natural reserves have been proposed, while many resorts have been built in national parks.

Appropriate agencies have been told to stop all activities related to the construction and development of Spa Le Mont Resort in the Ba Vi National Park.

The construction of the project has been completed and the investor plans to put it into operation. For the last four months in the national park, which is put under the strict control, illegal building occurred.

The People and Nature Reconciliation Center organized a workshop titled ‘Vietnam’s National Parks and Natural Reserves under development pressure’ on March 2 amid worries that more and more national parks and natural reserves have been compromised.

Vu Ngoc Thanh from the Hanoi University of Natural Sciences warned that the Son Tra Natural Reserve has shrunk in size.

The natural reserve was initially designed to cover an area of 4,000 hectares. However, it’s real area is 2,000 hectares only, while forests exist in an area of 1,000.

However, Son Tra Reserve may even become narrower since 140 hectares of land here have been reserved to develop a resort. It is expected that 40-storey buildings would arise there.

Thanh said Cat Tien Sa Company, the investor, got the license 10 years ago. However, it has not made a report on the possible impacts on the environment.

Meanwhile, the 140 hectares of land, where the resort would be built, is now the living environment of seven herds of 700 douc individuals, which accounts for 1/3 of total doucs in the Son Tra Peninsula.

Environmentalists blamed this on unreasonable programming of the parks and reserves.

Thanh said that buffer zones always exist when programming national parks and natural sanctions. On Son Tra Peninsula, for example, there is a buffer zone, where houses, resorts and villas are allowed to be built.

Meanwhile, it is the area where leaf-feeding animals, including douc, can find food. If forests are cleared to get sites for resorts, the animals will have to leave.

According to Nguyen Cu, an expert in natural reserve programming, natural reserves now are under management by both ministries – the Ministry of Agriculture and Rural Development and Ministry of Natural Resources and the Environment.