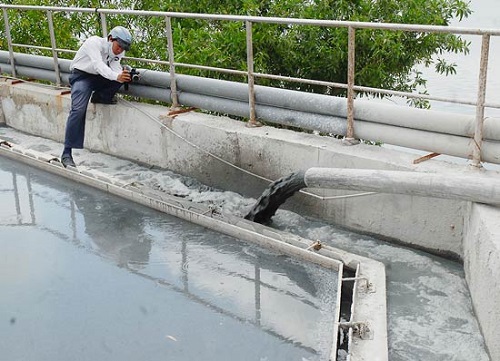 Foreign direct investment (FDI) attraction has marked a new phase in Vietnam and it is time for the country to reconsider all environmental regulations. Economic benefits should not be bartered at all costs, said experts at a seminar on industrial discharge in Hanoi yesterday by PanNature.

PanNature is a Vietnamese not-for-profit organization dedicated to protecting and conserving diversity of life and improving human well-being in Vietnam.

Director of the body Trinh Le Nguyen said that Vietnam has nearly 300 industrial parks concentrating in the Red River delta and southeastern region, 15 coastal economic zones comprising Vung Ang in Ha Tinh province, 12 thermal power plants that have come into operation and 50 others to function in the future.

Deputy Head of the Chemical Department under the Ministry of Industry and Trade Nguyen Xuan Sinh admitted that there are many legal documents on environment but the weak management ability of authorized agencies has failed to supervise businesses’ discharge.

Economic and environmental plans have been different among localities and between central and local agencies, he added.

To intensify the supervision ability, former Minister of Natural Resources and Environment Professor Dang Hung Vo proposed to entitle residents and civilian organizations to attend in overseeing businesses’ wastewater release. At present, only the Land Law has regulations on the whole people’s participation in supervising activities.

All regulations and standards on chemical discharge should be reviewed as they have been lower than those in the world and Asia. Current regulations just suit the initial phase of foreign investment attraction, he said.

Vietnam has entered a new phase of FDI atraction and belonged to the group of middle income nations. So it should not defy environmental consequences to lure investors, the professor said.

Among measures to save the environment, director of the Environment and Community Center Nguyen Ngoc Ly proposed to implement the law strictly. Illegal discharge should be counted as a crime to launch criminal charge against polluters instead of penalizing them. Technology application and surveillance rights should be intensified. There should have the law on water quality control to prevent toxins from being released indiscriminately into water sources.