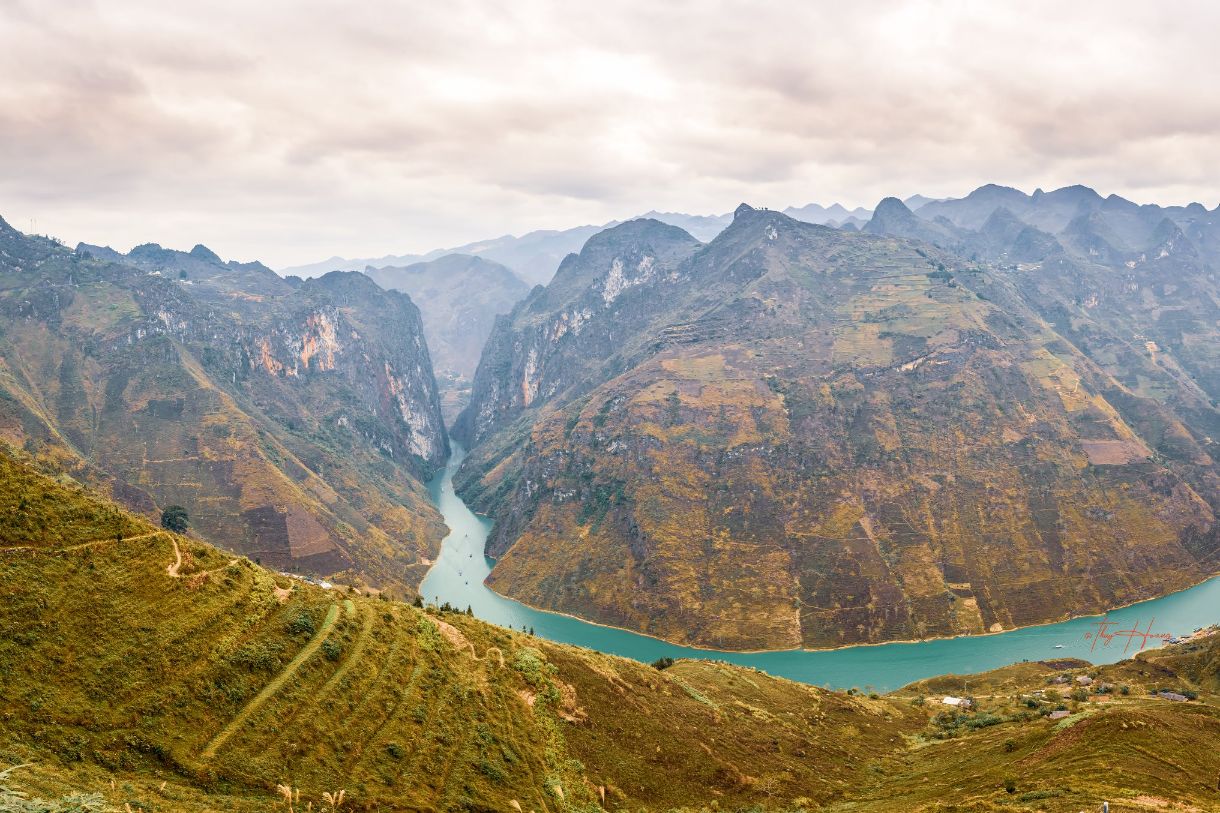 Stroll around any of Vietnam’s major universities, from Hanoi to the Mekong Delta, and ask a student, like Pham Oanh, what concerns her, and like so many other students with their smartphones in hand, her response will be the country’s environmental emergencies, ranging from air and water pollution to deforestation, loss of marine biodiversity, and waste treatment.

Oanh, 25, volunteered as a citizen scientist while she was a student at the Hanoi University of Natural Resources and Environment (HUNRE). “My main tasks included measuring the water level of the Nhue River in Phu Do Village near Hanoi,” she says. During that time, she met with locals to assist researchers in collecting data for their research. There were about 20 volunteers participating in her project, some of who were residents who had no background in environmental science, but climate change, coupled with the nation’s industrialization, has prompted this all-out volunteerism.

Vietnam’s fast-track economic growth over the past several decades arrived at the expense of the environment, leading to polluted waterways, extensive loss of wildlife, marine biodiversity, and a near-collapse of the fisheries. A global environmental performance ranking places Vietnam in 141st place out of 180 economies.

Prior to the pandemic, Hanoians wore masks to curb respiratory ailments because of rising auto and motorbike emissions. With more than 7 million motorbikes and a million autos, the 8 million residents need no reminder that their pollutant index is 5.6 times above the air quality guideline value of particulate matter 2.5 recommended by the World Health Organization (WHO).

According to WHO, upwards of 60,000 deaths in Vietnam are linked to air pollution every year, which is almost twice the number of COVID-19 deaths. As a result, the government plans to ban motorbikes in downtown areas by 2030 in an effort to ease air pollution and congestion in the city.

The Communist Party has consistently pledged to balance ecological improvements as part of their march towards continued economic growth. Last year at the 26th UN Climate Change Conference (COP26), Prime Minister Pham Minh Chinh underscored the critical need to address climate change since Vietnam remains one of the countries worst affected by extreme weather, witnessed in floods, droughts, and sea-level rise. He offered assurance that the Southeast Asian nation will “make use of our own domestic resources, along with cooperation and support of the international community in order to achieve net-zero emissions by 2050.”

The latest draft of Vietnam’s 8th Power Development Plan (PDP8) reveals a policy shift during the next decade away from coal-fired power and toward renewables and natural gas. What’s clear is that science and policy convergences are essential for securing sustainable development in promoting the transformation of the development model towards a green, circular economy, benefitting all citizens.

Over the past decade, more environmental-focused non-governmental organizations (NGOs) like Green Generation Network (The He Xanh) has brought together organizations, including environment clubs in Hanoi, Da Nang, and Ho Chi Minh City to help the nation with their environmental threats.

While Vietnamese students may not be familiar with America’s Rachel Carson and her inspiring 1962 book, Silent Spring, they are adopting social media tools to inform and educate the public effectively through millions of Instagram messages about environmental disasters associated with the poisoning of their environment.

With a population of 98 million and an increasing Internet user base, social media has proven to be the first choice among educated Vietnamese youth. Their online activism was highlighted in Ha Tinh Province, where Taiwan’s Formosa steel plant’s untreated toxic wastewater discharge into the East Sea caused one of the largest environmental disasters in Vietnam’s history. The fish kill was documented in social media posts. A Vietnamese government conducted an investigation determined that the release of toxic chemicals, including cyanide, resulted in the death of up to an estimated 70 tons of dead fish washing up on the shores of the nation’s central coast.

Although this tragic event occurred six years ago, it was a turning point for Vietnam’s environmental citizen scientists, many whom became first-time citizen reporters and posted photos of dead fish swept along their 125-mile coastline, devastating sea life, and local economies dependent on fishing and tourism. With more than 70 million users, Facebook rapidly became a lightning rod for environmental activism and sparking demands for improved environmental safeguards.

“As I have argued, social media (Facebook) and smartphones lay fundamental foundations for digital environmentalism and it is now translated into many forms of offline advocacy,” says Nguyen Quang Dung, a Ph.D. at the National University of Singapore.

The Formosa environmental disaster succeeded in creating unprecedented nationwide opposition to unchecked industrialization. Informed citizens, especially the youth, now demand a clean environment. The exponential rise of the blogosphere and the use of social media is triggering a new conversation among citizens and the government.

“Citizen-led activism on the environment in the past few years stemmed from the frustration of a few people or certain groups of people. Environment protection activities have been going on for many years,” said Associate Professor Nguyen Hong Quan, Director of the Institute for Circular Economy Development (ICED) at Vietnam National University in Ho Chi Minh City.

This green online public sphere has inspired a 2.0 environmental activism and as a result, has prompted the government to focus more attention on the environment. Nevertheless, two years ago, Facebook’s Mark Zuckerberg complied with demands from Vietnam’s ruling Communist Party to censor anti-government dissidents or risk getting knocked offline in one of the company’s most lucrative Asian markets with the highest number of social media users worldwide now approaching76 million users.

The daunting environmental challenges facing the Mekong Delta continues to spur increasing public interest both online and in the field, calling for environmental action to address air quality, climate change, sea-level rise, water conservation, and plastic waste. The silver lining is that the sweeping level of public engagement has increased confidence from the USAID to launch new projects worth over $112 million to mitigate climate change and advance environmental conservation throughout Vietnam.

Since several of the USAID programs are built around collective actions for clean air, plastics solutions, and water conservation, the participation of student volunteers or citizen scientists and their adoption of smartphones, helps to deepen the partnership activities found in the US-supported Mekong US Partnership.

Vietnam authorities acknowledge that environmental data is often lacking and inconsistent partly due to insufficient budget from the state. So, it is critical for data collection from different sources, especially among the local people and youthful volunteers, who are dedicating themselves to assisting with the local farmer’s environmental literacy and introducing harmonious solutions to address over-exploitation of groundwater, mangrove deforestation, and climate hazards.

The growth of grassroots environmental participation, and in collaborative research continues to increase among netizens. This informed environmentalism is a central part of the Mekong Environment Forum in Can Tho. There, workshops are laying the roots for what may be called “citizen science or community science.”

Citizen science is best defined as the collaboration between scientists and interested (local) citizens to broaden the scope of research and help compile scientific data through community-based monitoring and internet-driven crowdsourcing strategies. The prevalence of the Internet and smartphone usage throughout Vietnam offers the necessary digital infrastructure for doing so.

This ecological awareness and the use of data appears essential in shaping stories that Hanoi censors since it dispels ‘fake news” and enables a public sphere that opens up something new and unique in Vietnam—a participatory culture.

It’s simple: a citizen-driven culture means that large numbers of Vietnamese farmers, fishers, and educated youth are realizing their capacity to produce and share media with each other, often responding critically to the products of the state-controlled media. Their adoption of social media facilitates a free circulation of their observations across a range of social media platforms to address climate change, restore nature, and protect future generations.

Vietnamese NGO PanNature Receives EUR25,000 to Restore Forest in Son La
This led to the creation of INSPiRE Vietnam, a program aiming to restore 630 hectares of natural forest that won the 'Forest' category of the European Outdoor Conservation Association's recent voting campaign. As a result, PanNature will receive EUR25,000 (VND650 million) in funding from the EOCA for their work.
Categories