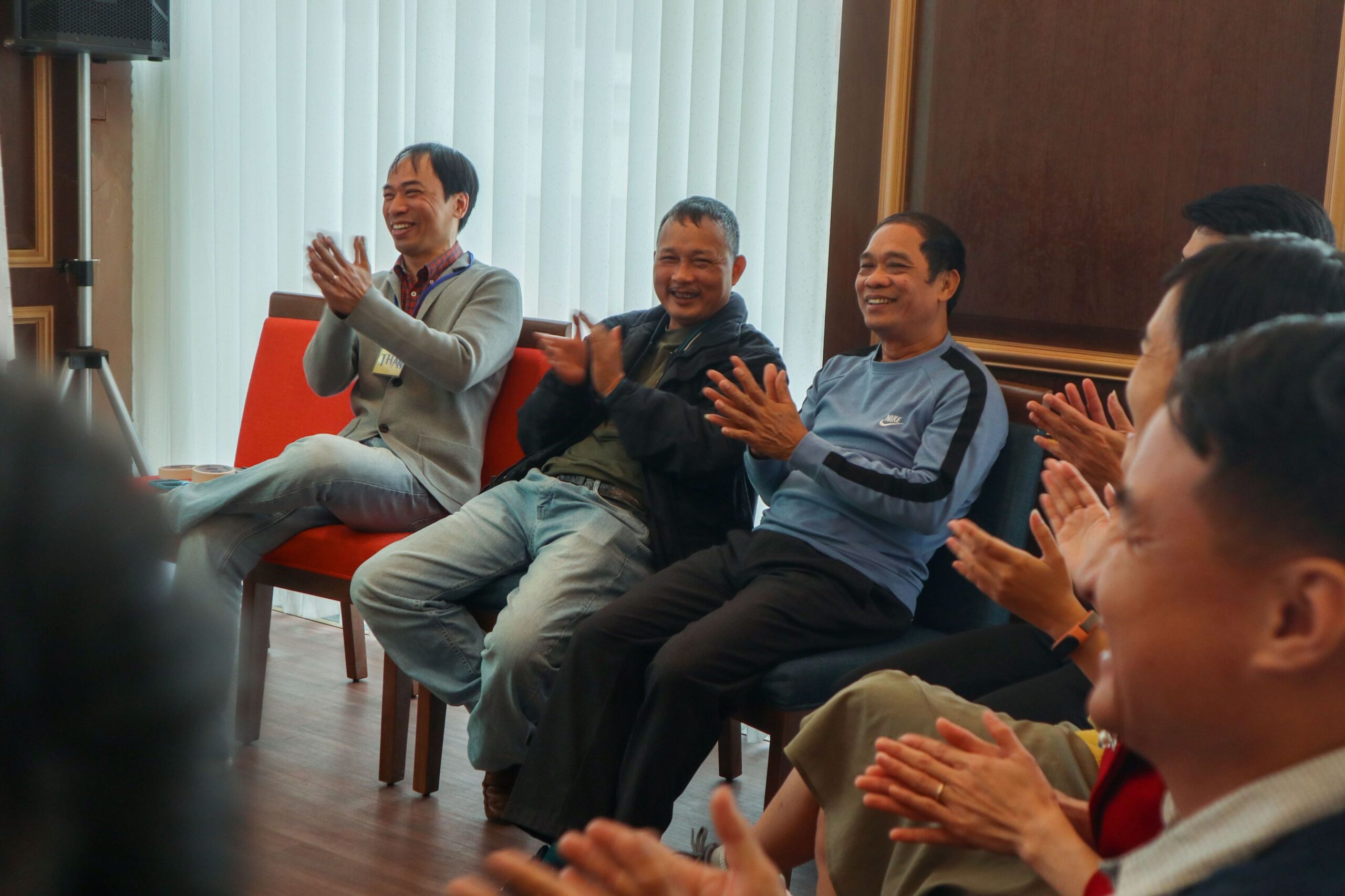 In 2018, Tran Huu Phuc signed up for a training course on facilitation skills. At first, he thought it would be like every other course he had attended since working at a forestry company in Hue (Viet Nam). After a week of study and practice, Phuc determined not to miss a single session in the training series that lasted for three years.

Phuc was one of the first 20 trainees in a series of 5 training courses for trainers (ToT) and practitioners (ToP). Organized by the Voice for Mekong Forests (V4MF) project, the courses targeted staff from civil society organizations, forestry management and forest governance-related agencies.

“I thought it was some boring training program,” Phuc recalled. However, after five days of participating in various interactive activities such as group discussions, role-playing games and field trips, Phuc felt sad when he had to leave the class to return to work. “I was especially impressed with the organization and teaching methods. Differing from other training courses, they involved me a lot so I could acquire the knowledge immediately and remember it for a long time.”

Like Phuc, Pham Thuy Thuy Tram has also taken part in many capacity building programs before. But unlike previous experiences of sitting and listening to theories, Tram could interact, discuss with lecturers and other trainees in the class and apply skills in practice. “I have learned many things here in the university, but I still did not have the opportunity to convert knowledge from books into practice,” Tram said. “Every time the organizers gave us a chance to practice locally, I realized many problems that I had not gotten the opportunity to examine. It was that process of learning and practicing that helped me consolidate my knowledge, understand it and apply it better.”

As the trainer of a young creative group in Ben Tre Province, Tram has joined almost all of the courses to support her work, which requires lots of leadership. She has met many seniors in different areas. Some were government and nature reserve’ officials, some were civil society staff, and others came from the private sector. They also held various positions in their organizations and agencies. There were officers and people who were at the management level for many years. With such different starting points and backgrounds, what surprised them was how harmoniously they worked towards the common goal of the class.

“What I love the most about this training series is that everyone can raise their voice and have a right to express their capacities,” said Tran Trong Nghiep, an official from Ta Bhing Commune, Nam Giang District, Quang Nam Province, Viet Nam. “What I thought and did was all respected by everyone.”

One of the first rules the organizers gave the participants was to respect diversity of thought. To Nghiep, a Katu, its meaning was far beyond the scope of a course. “As the community’s representative, I found this method effective. When communities can express their views, and those views are respected, we can resolve conflicts between the parties more easily and smoothly.”

When the rights of communities are respected

Nghiep referred to the part of a lesson on consent. One might use this word unconsciously many times. However, the real meaning of consent is complicated, especially when considering different parties’ relationships in the socio-economic development in forest conservation. In many projects affecting natural resources, the voices of vulnerable people such as communities living near forests or ethnic minorities are often not heard or genuinely respected. In some cases, although the public consultation has resulted in consent, communities were forced to accept it against their will or without sufficient information and time to consider. When the essential benefits of communities are not met, conflicts are inevitable. Conflicts, whether exploding or smoldering, are the root of failures in calling on people to join hands, preserve forests and conserve natural resources.

The courses have helped Nghiep, and other trainees understand that true consent must allow communities to say “yes” or “no” to any project or policy that may affect them. “For me, the voice of the weak is always what we need to recognize and respect if we want to achieve harmony in all society’s issues,” said Nghiep.

From understanding and valuing the rights of communities, the trainees also realized that they had to act differently.

Tran Huy Thong was a forest ranger in the Song Thanh Nature Reserve (now Song Thanh National Park, Quang Nam Province, Viet Nam). Holding responsibility in an area with diverse natural resources, Thong admitted that his work is under much pressure. “Not only residents but also many people in other provinces come to take the resources from the Reserve,” said Thong. “Therefore, we have to regularly mobilize people not to clear the fields for farming, collect wood or hunt wild animals. But people make excuses that they are so poor, and they can’t help but go to the forest for resources.”

“Everyone said they were poor, but if each one took a tree, the forest would be gone,” Thong said. However, after the training courses, the way he treats people has changed. “I used to be very tough. Now I know that using a soft tone will have a bigger impact than the deterrent one with those same words. Seeing people carry a saw into the forest, now I just gently advise them to go home. People understand and act respectfully.”

The philosophy of “harmonizing Indigenous People’s benefits” is at the core of the community forestry policy in Viet Nam. In practice, many forests are well protected not by the legal system or state management authorities but by local communities’ traditional customs such as village regulations or religious rituals. Circular 28/2018 of the Vietnamese Ministry of Agriculture and Rural Development also acknowledged people’s traditional rights to forest and resources as one of the principles for sustainable forest management.

“The local people have used forest resources for thousands of years,” said Hoang Xuan Thuy, former Deputy Director of the People and Nature Reconciliation (PanNature), one of the courses’ trainers. ” Only when the market economy emerged has the traditional usage of the people been disrupted. Therefore, it is advisable to rethink the prejudice against local communities as those who only create bad impacts on the forest. In fact, they can bring about huge change and should also be the first beneficiaries of forest conservation efforts.”

Forest protection responsibility is not only the State’s, and the State alone cannot save the forest. When the benefits of those closest to and understand the forest the most are valued, they will engage in forest management and biodiversity conservation.

Despite their diversity, those selected to participate in the courses had at least one thing in common. Their occupations were related to the forest or the communities that rely on forest resources. Therefore, the training focuses on developing future facilitators who can contribute to sustainable forest governance in Viet Nam. Besides tools to ensure the expectations of vulnerable people are heard, the courses also provided trainees with skills to promote the participation of different parties in forest governance.

“When carrying out an assessment survey of timber enterprises, forest growers and others, I realized that I only interact with people in the community before,” said Nguyen Hong Van about taking the courses as an officer in the Phu Tho Union of Science and Technology Associations. “So when it came to discussing with leaders such as directors and deputy directors at timber enterprises, agriculture departments or forest rangers, I was timid. When interviewing a leader before, I had to ask my boss for help. But from the skills I learned at the training, I feel more confident, and the task is no longer a big deal.”

Become a better version from work to life

Van has also improved his work efficiency by applying skills from the courses to his office’s consultancy department to develop an evaluation plan for the timber development policy. Van has started planning with a logical framework. After creating an outline, he added detail and asked everyone to work together and contribute ideas to improve it.

“My colleagues said that my method was a bit different from the traditional ones, as they had never followed things like logical frameworks or progress tables before,” Van recalled. “But it was obvious with each activity, each timeline or each product to be completed, the department’s members also found it impressive.”

The trainees’ journey of improving their work has also come in different ways. For Tran Huy Thong, presenting in front of people is no longer a red-faced experience. Instead, Thong naturally finds himself bolder and more confident when persuading communities to protect the forest or expressing his views in meetings. Meanwhile, Tran Trong Nghiep defines confidence as daring to respond to inappropriate decisions, even from superiors in an environment with many invisible frameworks. No longer accepting “blind obedience” or “one-way implementation,” after the training, Nghiep said, “If I know it is wrong, I won’t do it. In the past, there were many times I rushed to keep up with the progress and skipped the examination step. Now I’m not like that anymore because that method cannot guarantee work efficiency.”

As a Project Coordinator at GreenViet, an non-governmental organization (NGO) focusing on biodiversity conservation in the Central Highlands of Viet Nam, Hoang Hai Son has applied many skills to programs his organization is pursuing. Son has also used his new conflict management skills in love.

“Everything is beautiful when you fall in love,” Son confided. “Two people then have more chances to express their views, and many of them can lead to quarrels and break-up. I have applied the skills that I learned to practice listening. We have to give enough information about how we understand things to the other person and find out the reasons for their behaviors. It helps the two people reach a consensus easily, and the love will be more enduring and likely to overcome ups and downs.”

Vu Huu Than, the Training Coordinator at RECOFTC Viet Nam, has been on the three-year learning journey with trainees as they flourish and master their skills. “Many people have shared with us that they could not tell how many skills they have applied in their work and life since they started the training,” said Than. “It proves that the skills have become their second nature, and they just use them without effort. Then they will continue to make their home and their office a better place.”

Witnessing the trainees’ change, personally and professionally, Than understands that there are challenges but also opportunities ahead for them. “I know you can face a lot of obstacles when each of you is just a tiny link in a larger system,” said Than. “But you are the factor that could influence thoughts and behaviors of people on good forest governance. It’s not been an easy journey, but I have faith in you.”