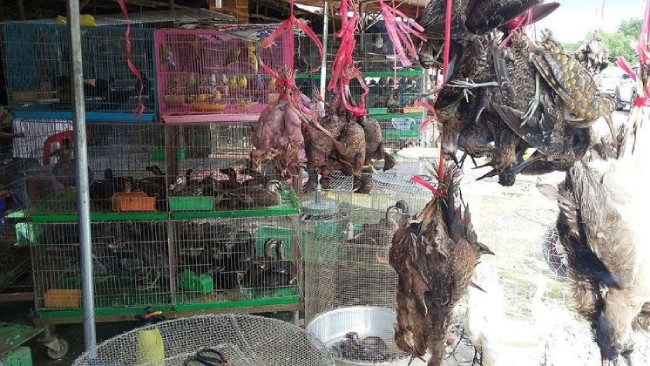 Representatives of 10 Vietnamese and international non-profit organisations working in nature and wildlife conservation have sent a petition to the Prime Minister to stop the trade of wild birds nationwide.

The letter said: ”In the already challenging times of the 4th wave of COVID-19 in Viet Nam, the rampant trade in wild birds nationwide that has recently been reported by the press may cause more outbreaks of other new emerging zoonotic diseases. This would pose a risk of creating epidemic catastrophes, destroying efforts and achievements in the prevention and control of the COVID-19 pandemic, and bring anxiety among the entire society. The World Health Organization (WHO) has scientific evidence to confirm that 70 percent of all emerging infectious diseases in people are spread from animals, most of which are from wild ones. Wildlife markets (including wild bird markets and restaurants) have been reported to have linkages to SARS, avian influenza, and COVID-19.”

It continued that the killing of wild and migratory birds has caused biodiversity loss and affected ecosystem functions and Viet Nam’s image in the international arena. Without drastic and effective measures to quickly end this situation, Viet Nam is at high risk of being included in the list of countries with many wild and migratory bird species threatened with extinction due to poaching and trade, although Viet Nam is a state member of many international conventions and commitments related to the protection of wild species.

Viet Nam has been identified as one of the most important areas in the East Asia-Australia bird flyway network. The country became the 34th member of the East Asian-Australasian Flyway Partnership (EAAFP) in 2014 and it showed a strong commitment to protecting wild and migratory birds.

Viet Nam officially approved the Pledge of World Leaders for Nature in Resolution 05/NQ-CP dated January 15, 2021, approving Viet Nam’s support for the World Leaders’ Commitment to Nature on the occasion of the UN Summit on Biodiversity within the framework of the 75th Session of the United Nations General Assembly.

The letter explained: “In Article 6 of the Pledge, Viet Nam has joined 84 countries around the world in committing to ending supply chains of illegal wildlife trade and working with international communities to ensure sustainable solutions for people and nature. The current massacre of wild and migratory birds does not show that Viet Nam has been in compliance with Article 6 of the Commitment.”

According to International and Vietnamese NGOs, wild and migratory birds have long been hunted, and illegally traded widely and openly on a large scale in many places throughout Viet Nam, especially in some hot-spots around protected areas and biosphere reserves such as Xuan Thuy, Cat Ba, Tram Chim, Ca Mau National Parks and in big cities such as Ha Noi, HCM City and Long An (Thanh Hoa market).

It said many rare, precious, and protected bird species of Viet Nam and the world are captured, slaughtered, stored, and sold in the restaurant chain named ‘Birds grow bigger’, and in shops selling wild birds, challenging law enforcement agencies.

Recently, the problem has been exposed in many investigative press reports, attracting public attention who requested an immediate end to these destructive activities.

Viet Nam is also home to more than 900 out of 10,000 bird species in the world (accounting for 9 percent), widely distributed throughout the country. Unfortunately, according to the Institute of Ecology and Biological Resources (IEBR), Viet Nam has 11 Critically Endangered bird species, 19 Endangered, 28 Vulnerable, and 50 Near-Threatened species. With the current situation of hunting, trapping, catching, and consuming wild and migratory birds, the number on those lists will increase rapidly.

The NGOs said they highly appreciate the number of laws and regulations on the protection of wildlife issued by Viet Nam’s Government. However, the lack of specific regulations on the protection of migratory and wild birds has weakened the enforcement by relevant authorities. Especially, a number of wild birds and most of the migratory bird species are not listed as endangered, rare, and precious species under Decree 06/2019/ND-CP, Decree 64/2019/ND-CP amending Article 7 of Decree 160/2013/ND-CP, so the law enforcement agencies have no legal basis to handle the cases or allow for a very light punishment.

To maintain populations of wild and migratory birds, conserve biodiversity, ensure functional ecosystems and prevent disease outbreaks, they request the Vietnamese Government to take a comprehensive approach with a series of specific measures as follows:

Strengthen monitoring of the implementation of Directive 29/CT-TTg dated 23 July, 2020 of the Prime Minister on a number of urgent solutions for wildlife management: requesting Ministries, agencies, and localities to lead, supervise, evaluate, promptly reward good examples and apply stringent discipline for agencies that do not strictly follow the Directive.

The group of NGOs said it believes that the Government’s strong decisions to protect wild and migratory birds are actions of practical significance for Viet Nam to achieve the goal of reversing the trend of biodiversity loss worldwide towards 2030, and prevent the risks of diseases caused by trade and consumption of wild and migratory birds.