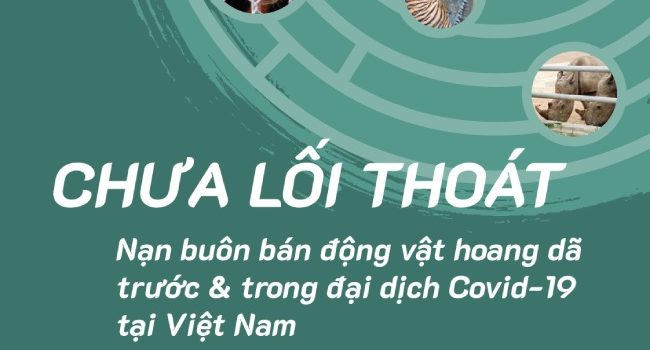 In recent years, Vietnam has become one of the global hotspots for the illegal trade of wildlife. Despite efforts of the government and counterparts in combating this endemic problem, evidence shows that the illicit trade has not declined.

In response to the call for stricter regulations on wildlife trade from nature conservation
organizations to prevent future pandemics, on July 23, 2020, the Prime Minister of Vietnam issued the Directive 29/CT-TTg on urgent measures to tighten management of wildlife, including suspending wildlife import, strengthening the enforcement of laws, and the strict monitoring of wildlife farming activities at a local level.

However, field surveys and media investigations conducted by People and Nature Reconciliation (PanNature) still observed the trade of wildlife products in many localities. Several wildlife markets are still open and even selling endangered and protected species. Ivory trading is still prevalent in many cities and provinces; wildlife farming is not strictly controlled as required, potentially posing many risks of infectious diseases.

The surveys and investigations results were reflected in the report: “In the Maze: An Outlook of Illegal Wildlife Trade before and during Covid-19 Pandemics in Vietnam“. The surveys and investigations were conducted in 20 cities and provinces during 2019 and 2020, targeting areas selling ivory, tiger, turtles (products), and wild birds. According to the report, 27 out of 31 areas surveyed were found with ivory in the sale. In addition, several markets in the Mekong Delta were actively selling turtles, birds, and other wildlife, including endangered species.

“We know that most emerging diseases originated from the transmission of pathogenic agents from animals to humans. The illegal trade, transporting, and consumption of wildlife increase the interface between humans and animals, which poses the risks of spreading dangerous viruses” Mr. Trinh Le Nguyen, Executive Director of PanNature, said. “Vietnam has managed to prevent the spread of Covid-19 effectively. We hope that the Vietnamese government continues to strictly control illegal wildlife trade, specially permanently close all illegal wildlife trade locations and markets to reduce the risk of future zoonotic diseases.”

Sincere thanks to the European Union for sponsoring us to conduct this report in Project “Partners against Wildlife Crime: Support to disrupting illicit supply chains of wildlife in Asia by leveraging civil society partnerships to increase the effectiveness of government action”.

Barriers to Combating the Illegal Trade of WildLife
The Covid 19 pandemic has been upended the world for the last two years, causing dramatic losses of human lives and social and economic disruption. Along with immeasurable losses, the pandemic has also entailed socio-economic changes and humanity's perception of the world we are dwelling in. The virus that causes the Covid-19 pandemic is likely to originate from wild animals. Although this is not a firm conclusion up to this point, it is a deeper warning than ever about the human way of life, which exploits nature indiscriminately, causes ecosystems to deteriorate, and leads to irreversible damages.
Environmental Volunteerism on the Rise in Vietnam
NGOs like Pan Nature continue to be engaged in World Environment Day by planting trees in Van Ho Commune in Son La, where the population of Northern white-cheeked gibbon lives and the endangered rare Northern white-cheeked gibbon. This volunteer activity is part of a long-term plan to restore 630 hectares of forest and conserve the rare Gibbon species. “While we do not have any formal partnership with the National Youth Union, we do work with the local Youth Union through capacity building and other initiatives says executive director Trinh Le Nguyen.
Earth Day 2022: Vietnamese ‘Earth Warriors’ Detail Ways To Help The Planet Heal