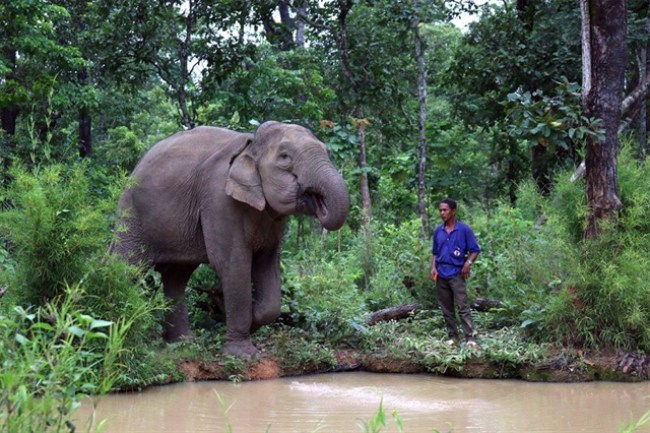 While the lyrics tell of elephants well-loved by local villagers, they are nonetheless domesticated and carry out arduous tasks. What’s missing from the lyrics is that, in reality, the number of elephants in Viet Nam is falling alarmingly, and while conservation efforts are indeed being discussed and funded, the massive creature is at serious risk of extinction.

Elephants have been part of the lives of villagers in the Central Highlands for centuries and have long been a cultural symbol known around the entire country.

It’s agreed that elephants are smart animals, with an incredible capacity to pick up simple skills quickly. They can be of great assistance to those who work the land, as they are more than capable of hard slog and heavy lifting.

Logging is where they are especially useful, having been taught how to uproot trees and move them around with their trunks. Away from “work”, they are often seen at festivals, which gives tourists a generally positive image of the beast when visiting places like the highlands’ Dak Lak Province.

Elephants are common characters in tales from the past. In Son Tinh Thuy Tinh (Mountain Genie and Water Genie), where two men compete for permission to marry the king’s daughter, a host of unique animals are featured, like elephants with nine tusks.

The elephants were considered trustworthy and helpful warriors in Viet Nam’s past history. They appeared in historical records of the Trung sisters, two Vietnamese heroines who rode elephants to lead the uprising against the Chinese Han domination in the first century. Elephants also fought by the side of King Quang Trung as he repelled the aggressors from Qing China in 1789.

From their last five years of intensive research, Duong Van Tho, Nguyen Thuy Hang, and Hoang Van Chien from the People and Nature Reconciliation (PanNature) released the “Elephants in the Central Highlands: Survival Threatened by Declining Population” report, analyzing existing conservation efforts and suggesting how such efforts might be better executed.

“The domesticated elephants in Dak Lak were wild before they were tamed, so are used to a lot of food and water,” said Pham Van Lang, vice president of the Dak Lak Elephant Conservation Centre.

“After being brought to the village, however, they are trained to serve tourists and given less food, and when they are sick the care and attention they need are slow in coming. This is why the domesticated population is declining in great numbers.”

The region’s forested area was 2,557,322 hectares in 2018, with a high coverage rate of 46 percent. The region’s natural parks, nature reserves, and habitat and species conservation areas play essential roles in preserving wildlife found on the Viet Nam Red List and the International Union for Conservation of Nature (IUCN) Red List of threatened species.

The elephants found in Viet Nam are categorized as the Asian elephant and considered “endangered” on the IUCN Red List and “critically endangered” on the Viet Nam Red List, and found in Appendix I of the Convention on the International Trade of Endangered Species in Wild Fauna and Flora (CITES).

Elephants are losing their natural habitat and food sources and their altered movements and migratory paths are leading to serious, even dangerous, encounters with humans. Large swathes of land that were previously forest now serve economic development and national defense. Wild animals have long had their seasonal migration paths and know where they can find food and where it’s safe to breed.

Now that these areas have undergone a great change, the animals destroy the industrial crops being planted, triggering huge economic losses and affecting the daily lives of farmers. Without a sustainable food source, the wild elephants must leave the forest for the fields, harming property, and threatening locals’ lives.

The situation has become particularly dire in recent times, with wild elephants coming out of their newly-bare habitat after the Government assigned forestry companies to reclaim forested areas.

“In the entire area where wild elephants live these days, only the very center of Yok Don National Park is virtually untouched by humans,” Bao Huy, head of the research team on elephant conservation in Dak Lak at the Central Highlands University’s Department of Forestry, said with regret.

“Northwest of Ea Sup District, which is the ideal natural habitat for wild elephants, tens of thousands of hectares of forest have been assigned to companies planting rubber trees.”

The MARD has since 1996 decided on a course of action to conserve the elephant population. The Prime Minister followed that up with a decision in 2006, containing a five-year urgent conservation action plan.

Positive outcomes were gained during those five years, including the completion of elephant conservation projects in the provinces with the largest elephant populations: Dak Lak, Dong Nai, and Nghe An. At the same time, the Dak Lak Elephant Conservation Centre was established to care for and support elephant reproduction.

The Prime Minister issued a decision in 2012 on an urgent action plan to 2020 regarding conservation efforts.

The following year the Prime Minister launched the “Extensive Conservation of Vietnamese Elephants between 2013-2020” project, with estimated funding of VND278 billion from the State budget and donations from foreign individuals and organizations.

According to the MARD, the project had reached certain goals by 2018, such as reductions in elephant hunting and killing, increases in elephant numbers, and fewer conflicts between elephants and humans.

Dak Lak began its conservation scheme early, reporting that VND61 billion had come from the People’s Committee for the Elephant Conservation Project between 2010-2015.

The focus was placed on the sustainable management of wild elephants, the development of the domesticated elephant business, the preservation of indigenous cultural identities, and expanding education on ecological environments.

In 2013, the provincial authorities approved an “Emergency Project on Dak Lak Elephant Conservation until 2020”.

A conference report says that “After 5 years of the conservation project, it had posted results by 2018 in estimating the number of elephant herds and conducting supervisory activities, as well as identifying and improving their habitats by adding water sources and planting food sources, proposing and implementing solutions to reduce human-elephant conflicts, such as natural habitat conservation and the construction of fences in Dong Nai and Nghe An; strengthening enforcement capacity through training, equipment provision, inter-agency cooperation, and international cooperation; and bolstering the defenses of local communities with instructional exercises and conflict prevention aids, while improving the livelihoods of people in areas shared with elephants.”

According to the Journal of Natural Resources and Environment, the 14 remaining wild elephants in northern Nghe An are in the two national parks of Pu Mat and Po Huong.

The parks’ regional conservation project has built 29 km of forest patrol roads, three end stations, two fire watch huts, and 4.43 km of stone trenches to prevent elephants from destroying crops. No elephants have been hunted since 2013, and two calves were born at Pu Mat.

“Three elephants are allowed to roam free, to protect the biodiversity,” a park representative said. “Elephant rides were very popular in the past, but we have been promoting new tours in the national park to watch elephants in their natural habitat. Ending the rides improves animal welfare and minimizes the potential for accidents, as some visitors have been thrown off the elephants over the years.”

“The care given by local people to conserve the elephant population is only superficial,” said Tran Quoc Chien, a young local man involved in an elephant conservation scheme that teaches kids about elephants.

“Through my project, I can see that elephant conservation involves the conservation of the ecosystem as a whole. I have been able to watch elephants in their natural habitat and see how they interact with each other. Elephant welfare is taken seriously here.”

While some elephants have destroyed crops on their seasonal migrations, Animals Asia has financially compensated a number of farmers for their losses.

The efforts of Animals Asia encourage local people to raise their awareness about the importance of elephant welfare and to cooperate with organizations and the Government in the overall scheme of elephant protection.

With the COVID-19 pandemic causing major economic issues worldwide, governments have been enforcing bans on the illegal sale and trade of wild animals.

The Prime Minister issued a directive on July 23, containing immediate solutions for managing wild animals. He has been resolute in abolishing the consumption of wild animals and imposed sanctions on those continuing to break the law.

The Prime Minister has also asked ministries to improve how they work together in dealing with the illegal ivory trade and tightened wildlife husbandry. Of particular note, State officials and their relatives have been specifically directed to follow the law and are strictly forbidden from engaging in the illegal purchase, sale, transportation, possession, or advertising of wildlife products.

Despite the decade-long effort to help the elephants, inherent issues remain. Policy enforcement coordination between management bodies is lacking.

The time from a policy being introduced to practical effects being seen is far too long and the procedures and paperwork involved are burdensome. Policies are still being implemented independently, with little in the way of co-operation between authorities at all levels, from commune and district to province, and forest owners, including forestry companies, management boards, individual households, and local communities.

“I don’t believe there is sufficient supervision over policies for elephant conservation,” he said. “Because of this lack of supervision, the elephants’ natural habitat is often destroyed and the sale of ivory and other elephant-related goods remains rampant, with no one taking responsibility. Regional officials must be held responsible for declining elephant numbers.”

The exact number of Central Highlands elephants is unknown, as funding has never been available for a reasonably accurate count. Numbers are roughly determined based on observations or footprints, while the most effective method of examining an elephant’s DNA costs some US$3,000 per sample.

A lot more research still needs to be done to help improve the quality of conservation activities, such as examining the reasons why elephants and humans are in conflict and sharing experiences of such conflict with other local people so that precautionary measures can be taken.

Changes are needed so that a precious creature and cultural symbol of the Central Highlands and Viet Nam lives long into the future.