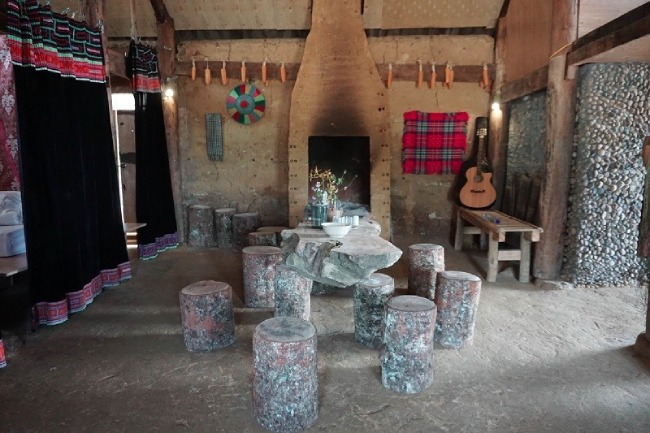 Sin Suoi Ho and Nam Dam in northern Vietnam along with A Nor and Ta Lang in the central region were recently named the country’s leading community-based tourism villages.

Sin Suoi Ho is a village occupied by H’mong in Phong Tho District, the northern province of Lai Chau. The village, 30 km from Lai Chau Town at an altitude of 1,400 m, experiences mostly cool weather throughout the year.

There is no sign of trash leading up to the village, with pots of yellow orchids seen everywhere. Unlike other villages, no buffaloes are allowed to roam at will.

Favored by mild weather conditions, the village is a hub for yellow orchids in the northwestern region, which blooms mostly in springtime.

Vang A Giang, the owner of an orchid garden, said on average, each household that combines the homestay and orchid business earns VND200 million ($8,700) to VND300 million per year. “We are also supported and trained by local authorities to operate more professionally.”

After a short trip to the village, Bach Van Anh, a tourist from Hanoi, said the local culture, nature, and people left a deep impression on her. “It is a nice and clean place, with orchids and fruits everywhere. We were able to indulge in delicious H’mong food, including “men men”, a kind of steamed corn starch typically enjoyed with rice, herbal drinks, and hanging meat.”

Home to 51 ethnic Dao households, Nam Dam is 45 km from Ha Giang Town in the eponymous northern province. It is located under the Twin Mountains, a symbol of local tourism.

Nam Dam Village has been chosen by provincial authorities as a key destination for developing community-based tourism. Currently, most villagers take part in the homestay business. The village can welcome over 30 visitors a day, with prices ranging from VND80,000 – 100,000 per night.

The project of assisting the poor engage in tourism has been implemented by the charitable Swiss organization Caritas in Vietnam and PanNature, a Vietnamese NGO, since 2012.

Tourists to Nam Dam are invited to try its specialty men men, a kind of steamed corn starch.

The festival is held only for teenage boys over the age of 10 in honor of their ancestors and parents. They are not considered grown-up if failing to take part in such a ceremony.

A Nor in Thua Thien-Hue is 70 km from Hue, capital of the central province, and 3 km from its A Luoi District. The village, at an altitude of 700 m and mainly inhabited by ethnic Pa Co (or Pa Ko), operates four homestays that can accommodate over 30 guests overnight.

Local culture is well preserved in festivals like the three-day, two-night A Rieu (worshipping heaven and earth); A Rieu A Da (new rice festival); and A Rieu Ping (reburying the dead).

At present, a new type of combo service has been introduced to travelers: bathing at A Nor’s three waterfalls, with the highest one at over 120 m, a hair wash, and dental steaming.

For food, visitors can indulge in “doac” wine, which is so special visitors can drink directly from the tree with the same name and a “quat” (meaning “buffaloes” in Pa Co) cake.

Dang Ngoc, a staff of the Saigontourist travel agency in A Nor, said the combo is so far extremely popular among foreign and domestic tourists.

“When a tourist has developed a dental health disease, we let him try the service here. After some time, his symptoms decrease. The folklore medicine really works and tourists like it. Plus, the price is affordable at just VND20,000 ($0.87) for dental steaming and 30,000 for a hair wash.”

Nguyen Cong Khanh, a visitor from Hue, said he was really impressed with his first-time trip to Ta Lang.

“Before we came, we researched homestays here and found it exactly like what we had thought. People here stay in “Guoi” houses, built at the center of the village and featuring one huge pillar at the center and eight smaller pillars around.

“Locals habitually build their own homes around the main “Guoi” house, seen as a sacred site for ancestor worship. The bigger the house, the wealthier the village is considered.”

The”za za” dish is a special feature of the village’s distinctive culinary foundation. Specifically, frog, bird, fish, and chicken meat are mixed with asparagus and chili and stuffed into fresh bamboo pipes then roasted until fragrant, accompanied by chilled “ta vat” wine.

At present, there are five stilt houses that serve guests, embellished by Co Tu cultural features. Over 30 locals operate homestays in the area. The price is VND70,000 per night.

When night falls, tourists indulge in “Rum cay” folklore music, or “Tung tung da da”, a dance to worship heaven, in front of the “Guoi” house.