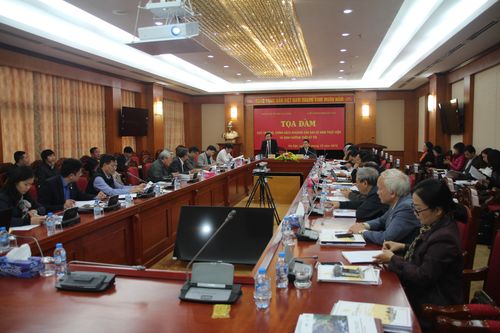 Experts debated last week whether the Law on Mineral Resources (LoMR) should be amended, with some arguing that several of its articles are unrealistic.

In a round-table organised by the Party Central Committee’s Commission for Economic Affairs (PCEA) on December 23, Le Ai Thu from the Vietnam Mining Coalition(*) pointed to two particular articles of the law, which he believed to be “very difficult to apply in real life”.

The first is the term “money to have a mineral resources exploitation licence granted”, for which there is no clear definition.”Many believe the money is actually a mineral resources tax calculated according to a scientifically baseless and unrealistic formula in the law,” Thu said.

He also raised concerns about the bidding process for the rights to exploit mineral resources, which has not recorded a single success over the last six years since the LoMR went into effect in 2010.

The bidding for areas that are already exploited was simply “impossible”, he said, as the exploitation licences to work at those areas were all granted way before the LoMR was in effect.

Regarding the areas yet to have their minerals explored, neither the authorities hosting the bidding nor the minerals companies – the bidders – know about what they are trying to sell and buy.

“That’s why bidding was only held in a couple of localities on a few small mines so far,” Thu said. “I think it’s time to amend the LoMR particularly on those two issues.”

A report by the PCEA on implementation of Politbureau Resolution 02 on the orientation of the mineral resources and the mining industry strategy towards 2020 acknowledged that the number of successful bids for mines “was not many”, while there has not been any assessment yet on the performance of the bidding process..

Natural Resource and Environment Deputy Minister Nguyen Linh Ngoc, meanwhile, was against the idea of amending the LoMR as it was “too soon to do that”.

“We have not yet fully implemented the LoMR and Resolution 02, due mainly to lack of appropriate financial mechanism,” he said. “That is the core problem now.”

Deputy General Director of the General Department of Geology and Minerals of Vietnam, Lai Hong Thanh, agreed with the two problems in the LoMR mentioned by Thu, but added that a newly-issued Government resolution might be able to help.

Resolution 158, which will come into effect on January 15, 2017, imposes various changes in the bidding process, he said. For example, it allows a bidding to take place as long as there are two bidders, not three as required so far.

“Bidding for mineral exploitation right is unprecedented in Vietnam. That’s why confusion is hard to avoid,” he said. “But we will soon have an assessment report on the issue for proper adjustments and changes.”