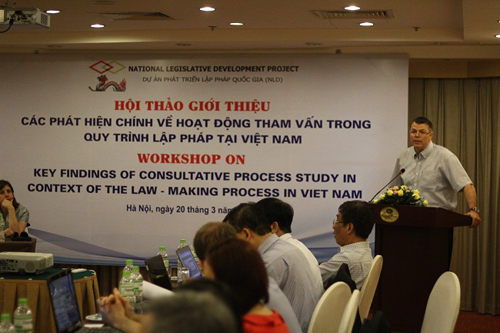 After hearing some key findings of the assessment of Vietnam law making process prepared by Canadian Executing Agency and the key findings and recommendations from Dr. Hoang Ngoc Giao’s research team, the environment of the workshop was heated up with a lot of comments and opinions from participants. The general ideas were that the key findings gave fairly complete and detailed information on the current practice of public consultation in the Vietnamese law-making process and the key findings and recommendations of the study were highly agreed. However the report has not yet revealed the main cause of the shortcomings, which is that policy initiatives often come from the Party’s resolutions, whose development process is not democratic, transparent neither accountable. The report only mentions the entities involved in the legislative development process but not the role of individuals, meaning that apart from the drafting committees, the reviewing entities, the National Assembly, the NA deputies need to be engaged in the consultative process since they are the decision makers (for a law to be adopted). Especially in Vietnam deputies are not full time in this service. The report is considered to be purely a review and compilation of other existing reports and studies. Specific suggestions and recommendations should be made for the draft LPLD (for example to find a term to also include the explanation responsibility in the collecting of opinions).

In details, some contents to be supplemented to the report are: Information should be updated on how different social organisations have been engaged in consultation activities in the legislative development process, which measures should be taken to reinforce their engagement in the legislative process. In order for the legislative agenda to be close to the reality, consultation should be conducted in this stage together with constructive criticism and review of the implementation of current laws. In practice the documents put on websites for comments are usually poorly prepared, therefore it should be stipulated that the draft to be commented on should be the one submitted to the Government for approval. Moreover, more attention should be paid to enhance the capacity of social organizations for engaging in the consultative process and proper methods should be proposed to facilitate the engagement of social organizations in the consultative process.

Participants all agreed that some specific recommendations for the draft LPLNDs on the consultative process should be quickly made and transferred to the Drafting committee for the draft will be submitted again for adoption in May 2015. All the contributions and comments should be put on the same website consistently and feedback should be provided to these comments. It should also be provided that a draft law cannot be adopted if explanatory report is not included in the dossier for adoption. Accountability is an important issue and can be the motor for the consulted people to contribute comments. And finally, the methods for consultation should be innovated and diversified.

Receiving the comments from participants, the research team would consider and incorporate useful ideas into the final report to submit to NLD.