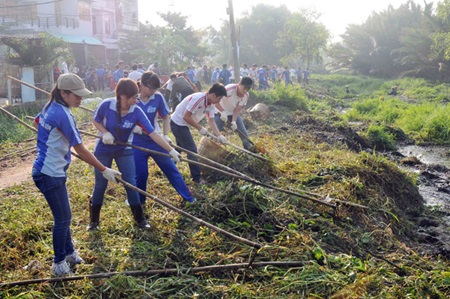 Lack of co-operation at ministry level is hindering the implementation of last year’s Law on Environment Protection.

This was admitted by Dr Dong Thanh An from the Viet Nam Environment Administration (VEA) at a conference in Ha Noi last week to discuss the roles of organisations and communities in protecting the environment as well as to define and legalise their activities.

Last year’s Law on Environmental Protection stipulated that the Fatherland Front, the representative body of the country’s numerous social groups and communities, was the main group charged with environmental protection.

The law, which came into full effect on January 1, aims to establish a legal framework for organisations and communities to be a part of the decision making process and other roles, such as consulting, supervising and debating in matters related to the environment.

Dr.An said the 2014 law had given citizens greater rights and influence in environmental protection.

Chiem said MARD and the Ministry of Resources and Environment applied different versions of the environmental protection law and as a result failed to co-operate with each other.

He proposed the two ministries start building a common framework to effectively implement the law.

Trinh Le Nguyen, director of PanNature, a Vietnamese not-for-profit organisation dedicated to protecting and conserving diversity of life, said it was important to further define the roles of organisations and communities and set up mechanisms for them to voice their opinions.