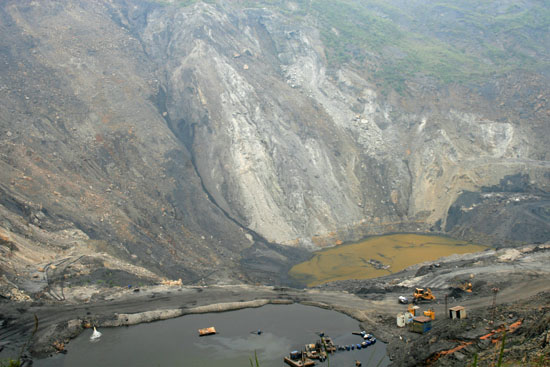 Making profit is the most important task for every commercial bank, because of which the environmental risks are sometimes overlooked when banks approve the lending.

In general, credit officers do not pay much attention to the possible environmental risks when analyzing investment projects submitted by businesses for loans, simply because the requirement has not been legalized with the regulations stipulating banks’ relevant responsibilities.

The State Bank of Vietnam, the watchdog agency of commercial banks, also has not released any legal document, stipulating that banks need to consider environmental risks when they provide credit to fund enterprises’ projects.

In fact, the duty of protecting the environment of all the subjects in the society has been stipulated in the 2005 Environment Protection Law already. However, the law only clarifies the responsibilities of production, service enterprises, while there have been no detailed regulations about the banks’ responsibilities.

An unreleased report by Nguyen Hong Anh from PanNature has pointed out that most credit officers would simply check if the enterprises-borrowers have the reports on the projects’ possible environment impacts, while some of them would check the enterprises’ waste water treatment technology and the re-settlement plans.

However, the officers would examine the matters based on their knowledge; while there has been no guidance on how to examine the issues.

Anh’s survey was conducted at 19 biggest commercial banks in Vietnam.

The problem is that the reports on possible environmental impacts are made by borrowers under the formalization, while in many cases, they do not contain true information or cannot suggest reliable solutions.

However, credit officers do not care about verifying the reports. They just need to be sure that such reports exist and that they strictly follow the stipulated procedures when considering the investment projects.

Meanwhile, banks, which have the right to fund or not fund the investment projects, can help minimize the environmental risks by asking the borrowers to work seriously on environmental protection solutions. In principle, the thorough examination over production projects would force enterprises to strive for clean and safe production.

Some international finance institutions in Vietnam including the World Bank, the International Finance Corporation (IFC), and the Asian Development Bank (ADB) all have the environmental and social standards that the partners or the donation beneficiaries have to follow.

However, the first research works on the role and responsibilities of Vietnamese commercial banks in the environment protection.

A survey by IFC conducted in 2012 showed that only three Vietnamese commercial banks have the environmental and social risk management systems, two of which (Techcombank, Vietinbank), use IFC sets of standards, while the other (Sacombank) has built up a policy of its own.

The State Bank of Vietnam has said it is compiling a legal document stipulating the responsibilities of commercial banks to ensure the environmental and social safety in credit activities.

Anh believes that it is necessary for the banking sector to join forces with involved parties to build up an environment risk classification and assessment system, which banks can refer to when making decisions on providing credit.

The state should think of a mechanism which allows non-state units to join the building of independent classification systems.

Commercial banks should be required to make public–the information about the credit provided to the production projects which may influence the environment and social security, so that people and independent supervisors can keep watching and reporting about the banks’ fulfillment of their duties.