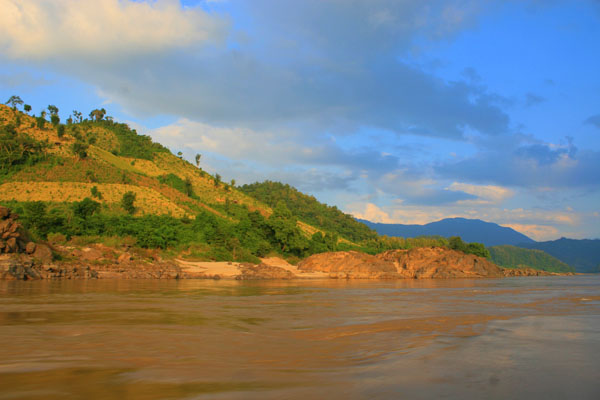 For those who had believed that Laos would stick to its pledge to shelve construction of the controversial Xayaburi dam, November 7 was a black day.

It was on that day that Laos broke ground on the US$3.8-billion project despite vehement objections from environmental groups and its neighbors who said the 810-meter (2,600ft) dam would unleash massive ecological changes on a river that feeds around 60 million people.

Worse still, experts said, the decision to forge ahead with construction of the 1,285-megawatt dam would set off a dam-building binge on Southeast Asia’s longest river and galvanize construction of mega-hydropower plants around the world.

“The decision to move ahead against the advice from neighboring countries and the international development community is certainly setting a very bad precedent,” Marc Goichot, who works for environmental group WWF’s Greater Mekong program on sustainable hydropower, told Vietweek.

Opponents of the Xayaburi project said its commencement would also kick off construction of the 10 other dams proposed on the lower part of the 4,900km-long Mekong, which also runs through Myanmar from its source in the Tibetan plateau.

Environmental groups had hoped that its stoppage would put the brakes on massive dam-building programs elsewhere in the region and around the world.

Experts have lamented that China’s dam-building spree in both Southeast Asia – in Laos, Cambodia, and Myanmar – and at home is threatening to have a serious impact on the lower Mekong.

With Vietnam, Laos, Thailand, and Cambodia sharing the lower reaches of the Mekong, China’s upstream dams have continued to cause worry about their water flows, development plans, cumulative environmental impacts, and trans-boundary impacts.

China is looking to almost double its hydropower capacity – to at least 300 gigawatts by 2020 – by building three more dams on the Mekong.

Elsewhere, people from India to Brazil and Malaysia to China have also objected to massive building programs underway in their countries.

A Reuters story said last December that the technical potential for hydropower globally is five times current production based on 2008 data, citing the International Energy Agency. The story said China had developed 24 percent of its potential, the US 16 percent and Brazil 25 percent and that by 2050, global hydropower generation could nearly double.

“There is indeed an alarming rebound of big hydro projects around the world,” Richard Cronin, director of the Southeast Asia program at the Stimson Center (a Washington think-tank), said.

Although many of the arguments are about how “clean” hydropower is compared to coal, oil and gas, this is very short-sighted and simplistic, Cronin said.

“Especially in view of climate change, including the shrinking winter snow cap in Tibet and the Himalayas, increasing droughts, rising sea levels and land subsidence, which will be accelerated as big dams capture more and more of the nutrient-rich sediment flows that sustain the world’s deltas,” he said.

Landlocked Laos, looking to become the “battery of Southeast Asia” by exporting the vast majority of its power, has promoted the Xayaburi dam as a potential source of income and investment that will spur its $7.5-billion economy.

A senior Lao government official has maintained that the dam is an economically viable and environmentally friendly project that “will bring benefits to people for decades to come.”

“The people of Vietnam can rest assured that there will be no negative downstream impact from the Xayaburi [dam],” Viraphonh Viravong, Laos’s deputy energy minister, told Vietweek.

Viraphonh said last week that some aspects of the dam’s design had been changed to “reassure neighboring countries.”

AFP quoted him as saying that changes to the project would address the two major issues – fish migration and sediment flow – by including a passage to allow 85 percent of fish to travel along the river and a “flushing system” to prevent sediment build-up.

“[Laos] is planning to build many hydropower projects to serve the energy needs of the people of the Mekong region,” Viraphonh told Vietweek.

“The time for fear is past.”

But independent experts have shrugged off Viraphonh’s defense, saying it was not backed up by any credible evidence. They dismissed the mitigation measures Laos chalked out for the dam’s impacts on fisheries and sediment flows as “unproven.”

“There has never been a fish ladder or fish pass built in the region that was capable of effectively accommodating migrating fish, and it is unclear why this one would work,” Ian Baird, a Laos expert with the University of Wisconsin-Madison, said.

In December 2011, Vietnam, Cambodia, Laos and Thailand agreed to put off construction of the giant Xayaburi dam to await further studies about its possible impact.

Laos hired Finland’s Pöyry Group to review the project, and has since presented the findings to its neighbors. But environmental groups and independent experts emphatically dismissed the findings, saying they downplayed the severe and irreversible effects of the dam.

A technical review released in March 2011 by the Mekong River Commission (MRC) – a regional body established to coordinate dam projects on the river – on the Xayaburi dam is considered the most comprehensive analysis of its potential impact.

Experts hired by the commission estimated that Xayaburi would curtail the migration of anywhere from 23 to 100 species of fish and spell doom for the giant catfish, the river’s most distinctive species.

The MRC study pointed out that the dam’s ability to generate power would be severely compromised in 30 years since its reservoir would silt up.

Experts said it would devastate the flow of vital fish population and nutrient-rich silt to the Mekong Delta, Vietnam’s rice bowl.

But in what appears to be Southeast Asia’s most fierce environmental battle, Vietnam is likely to be the underdog.

Since construction began last week, Vietnam has only said it hopes Laos will continue to study the possible impacts of the dam.

Cambodia, once a vocal opponent of the dam, has remained silent. The Thai government has refrained from either criticizing or expressly endorsing the dam.

But Ch. Karnchang, Thailand’s third-biggest construction company by market value, owns a 50 percent stake in Xayaburi. Thailand is also set to buy 95 percent of the electricity from the dam and four Thai banks are financing the project.

“By playing such a neutral role, Thailand stands to gain rather than lose from the Xayaburi dam,” Trinh Le Nguyen, executive director of the Hanoi-based Vietnamese nonprofit People and Nature Reconciliation, said.

Other than the power-buying deal, Thailand would also gain a competitive edge if Vietnam’s rice production is affected, he said.

Thailand has been the world’s traditional biggest rice exporter since 1983. But this year, it is in danger of losing its top spot because of the rice purchase scheme, a populist measure that has made Thai rice nearly a third more expensive than grain from competitors Vietnam and India, a Reuters report said November 6.

Vietnam, Thailand, Laos, and Cambodia are bound by a 1995 Mekong treaty to hold inter-governmental consultations before building dams. But none has a veto, and Laos will have the final say, though considerable diplomatic pressure can be exerted on it.

It is not clear if Vietnam is doing so with Laos and why Cambodia has kept mum. But given the status quo, Vietnam would be alone in this battle, Nguyen said.

“It will be an uphill task for Vietnam to enlist its neighbors to join the fight.”