Vietnam has good potentials for hydropower development with the watershed system consisting of more than 2,000 rivers and streams. In theory, hydropower can supply about 308 billion Kwh of electricity. Vietnamâ€™s technical hydropower reserve of plants over 10 MW is 72 billion Kwh. There are about 360 sites suitable for installing hydropower plants with total capacity of 17.500MW (1).Â  This does not include other hydropower plants of smaller sizes.

Currently, hydropower accounts for a large portion of electricity production. The development strategy of Vietnamâ€™s electricity industry in the period of 2006 – 2015 with orientation toward 2025 also gives priority to the development of hydropower and encourages investment in small-sized hydropower plants. It is estimated that by 2020, the total capacity of hydropower plants shall reach around 13,000-15,000 MW. However, according to the estimation of the Institute of Energy, over the long term, the percentage of capacity and power generation of hydropower will reduce significantly in comparison with other energy sources. It is estimated that by 2025, hydropower capacity will hold only 24.1% (44% in 2005) and power generation will account for 14.1% (30.8% in 2005). 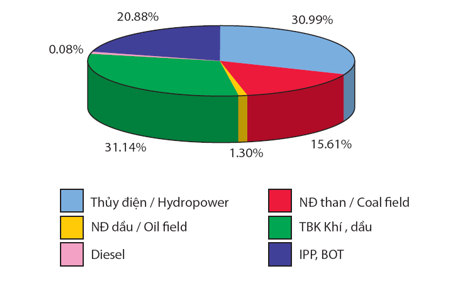 One of the most difficult and complicated issues in developing hydropower projects is human resettlement for communities affected by plant and reservoir construction, especially ethnic communities in remote areas. In fact, this is a common challenge for many countries having hydropower development. Consultation of these communities during the project planning and implementing process is an important step to safeguard benefits of affected groups and prevent potential unwanted conflicts.

The current development strategy for hydropower with many projects being planned and carried out at the same time in short term faces great challenges. To date, there are not yet many successful models for human resettlement and provision of alternative sustainable livelihood in Vietnam. Therefore, decision makers and project implementers need to concern and learn from experiences in other countries. In addition, there should be well-planned interventions for capacity building for affected communities and providing supports for these communities more effectively in order to ensure that benefits from hydropower development must go first to those live close to the project sites. 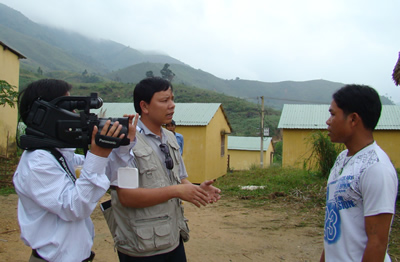 Hydropower plants are often constructed in areas with high ecological sensitivity, where can suffer serious environmental changes at large scale under construction activities. The feasibility study stage of these projects also involves environmental impact assessment. However, quality and transparency of these reports are questionable. Many reports describe environmental issues and problems resulted from construction process of hydropower plants but provide little information on proposed screening solutions or mitigation measures. Furthermore, the requirements for ongoing environmental assessment and monitoring during the project implementation are not yet well defined in current legislation.

According to the assessment of the Vietnam Union of Science and Technology Associations (2), hydropower development can cause many environmental impacts and affect water resource use, specifically:

Social and environmental aspects in small-sized hydropower projects need more attention and concerns of policy makers and government authorities. With low investments and pressure of quick capital withdrawal, project investors are more willing to bypass some phases, process, or requirements to keep up the project progress. According to the Ministry of Industry and Trade, in 2008, 39 small-sized independent hydropower plants (often referred to as IPPs) with total capacity of over 43MW will go into operation (3). At the beginning of April 2008, there were 217 IPPs with capacity of nearly 4.100MW registered by private companies, joint venture companies and state corporations. In fact, some of these projects donâ€™t properly comply with requirements to ensure the social and environmental benefits that have faced objections and disagreements from local communities and authorities. 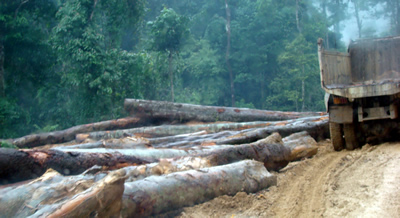 Another loop-hole in development of small-sized hydropower plants involves some inventors taking advantage of these projects to appropriate natural resources. Several hydropower projects are merely cover-ups for inventors to exploit forest products in watershed primary forests, which are strictly protected by existing laws. This loop-hole is being used in many projects. Some articles in the series on Vietnamâ€™s hydropower published on www.ThienNhien.Net also cover this aspect.

Transfer of land-use rights from the state to the community…

Birding tourism in Vietnam: Still a niche market
Richard Craik, originally from Chester, an historic city close to Liverpool in north-west England, has spent the last 17 years living in Vietnam. On the crowded city streets of Ho Chi Minh City, he is just another foreigner living and working there. But among Vietnamese, foreign birdwatchers and conservationists, Richard and his company's name, Vietnam Birding, are familiar.
Save the Mekong Coalition Launch
On March 14th 2009 in Bangkok, a new coalition to save Southeast Asia's Mekong River is launched at a special photography exhibition. The Save the Mekong coalition was formed in response to growing public concern about the effects big dams would have on the Mekong's migratory fish stocks, regional food security, and the livelihoods of millions of people. PanNature also joins the Save the Mekong coalition and pledges to play an active role in promoting information and raising public awareness on issues related to the Mekong River in Vietnam.