Every Sunday at 7.30am, volunteers for PYNet, which stands for Network Promoting Youth to Act for Community and Develop-ment, gather at the Ly Thai To monument to start their cycling tour around Ha Noi. Since the project got rolling in September, with support from People and Nature Reconciliation (PanNature) and Ban Tay Viet Limited Co, enthusiastic volunteers from all over the country have been participating.

They ride the streets of Ha Noi every Sunday on bicycles decorated with colourful flags, fodder for honks, taunts and the occasional rolled-up ball of paper.

After two months of this, PYNet volunteers have grown thick skin and a deep sense of purpose. They want attention, in fact, to spread their message about the importance of environmental protection. 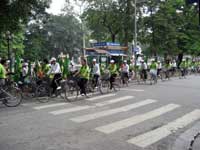 Every Sunday at 7.30am, volunteers for PYNet, which stands for Network Promoting Youth to Act for Community and Develop-ment, gather at the Ly Thai To monument to start their cycling tour around Ha Noi. Their flags and churning pedals proudly proclaim that there are alternative modes of transportation that donâ€™t harm the environment.

“If you are a Ha Noi resident and you visit a rural or mountainous area, you will notice the obvious difference in air quality with your first breath,” says Dang Huong Giang, the groupâ€™s leading organiser.

“Hanoians must breathe dusty, smoky air and put up with unbearable noise and streets piled high with waste,” he says. “Thatâ€™s why weâ€™ve launched the Green Bike project, cycling around to raise public awareness on environmental issues so that people will change their habits.”

Since the project got rolling in September, with support from People and Nature Reconciliation (PanNature) and Ban Tay Viet Limited Co, enthusiastic volunteers from all over the country have been participating. E-mails and letters have flooded in, and volunteers join the pack to ride on Ha Noiâ€™s streets every Sunday.

Although most of the projectâ€™s participants are young university students, some spry elderly volunteers have joined as well.

“Iâ€™ll always remember the words of an 80-year-old volunteer, who said that he had never wanted a polluted Ha Noi and an undeveloped Viet Nam. He asked us if we thought he was too old to join and insisted that he was as strong as we were,” recalls Nguyen Tuan Anh, a member of 360 Degree Environment Club, one of several organisations that has collaborated for the project.

In addition to riding around the city, the green bikers stop at parks and entertainment venues to collect waste.

“Actions speak louder than words. If you call for people to protect the environment but donâ€™t do it yourself, then how can they listen to you?” asks Vuong Dinh Ha, the leader of one of PYNetâ€™s five subgroups.

Ha believes that those activities have inspired observers to follow suit.

For volunteers like Nguyen Thu Trang, a student from Ha Noi University of Natural Sciences, the first cycling tour on September 16 was a triumph.

Other volunteer groups also have joined PYNet in their campaign to protect the environment, including KOTO, a programme for disadvantaged children studying and living at the cityâ€™s Social Protection Centre.

Realising that spreading public awareness takes time, PYNet opted to extend the Green Bike campaign after its successful two-month trial run and make it a weekly activity. Thereâ€™s even been talk of starting up a sister project in southern Viet Nam.

Now that Green Bike is successfully underway, PYNet has turned its attention to a second project to limit the illegal trade of wild animals in Ha Noi, with sponsorship from the Sida Environment Fund.

“Many restaurants try to draw customers by serving wild animal meat, a problem mainly due to a lack of legal knowledge among restaurant owners and traders,” Giang says. “Thatâ€™ll be our next target in the campaign to protect the environment.”