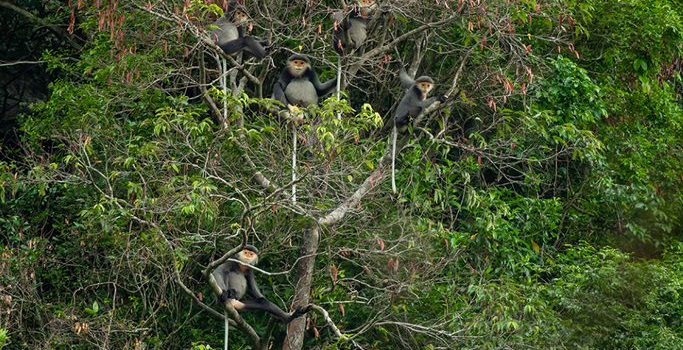 Recent biodiversity surveys undertaken by Fauna & Flora International (FFI) in Kon Plong, Kon Tum Province, have revealed a treasure trove of rare wildlife. Home to many threatened species and rich biodiversity, Kon Plong deserves to be considered one of the most valuable forests for conservation in the whole of Vietnam.

Starting work in 2016, FFI’s first survey uncovered a population of approximately 500 grey-shanked douc langurs in Kon Plong, as well as more than 100 northern yellow-cheeked gibbons up to now. Both of these species are highly threatened with extinction. The grey-shanked douc langur is found only in Vietnam and is listed as Critically Endangered, the highest threatened level on the IUCN Red List. The Kon Plong population is likely one of – if not – the largest population that remains for this species, along with the population in Kon Ka Kinh National Park.

Intensive camera-trapping surveys, undertaken in partnership with IZW, using 130 Panthera remote camera traps, have proven the existence of over 121 species of mammal and bird, including several endemic and Critically Endangered species. The population of the Owston’s civet, in particular, is of international importance. This species of small carnivore, listed as Endangered by the IUCN, was found in surprisingly high abundance in areas of Kon Plong. They have gone extinct or been seriously affected by snaring in most other places including large national parks and nature reserves in Vietnam.

Taken together, these results identify the forest in Kon Plong as one of the most valuable areas for conservation, not only in Kon Tum, but in the whole of Vietnam and the wider region.

“Kon Plong is arguably the most important forest in Vietnam outside of the formal protected area network. Not only is the area rich in rare and endemic species, but it also provides the only forest connectivity between the southern Annamites (ending in Quan Nam) and the eastern Annamites extending into Gia Lai and beyond”, said Josh Kempinski – Country Director of FFI Vietnam Programme

“Kon Plong has a rich biodiversity with many endemic species such as grey-shanked douc langur and chestnut-eared laughing thrush as well as many high medicinal value plants. Kon Plong is also home to many ethnic minorities with diverse indigenous knowledge and unique traditional culture of the Central Highlands of Vietnam. People need to preserve this area for generations to come.”, said Ha Thang Long – Chairman of GreenViet.

Whilst the results are undeniably good news, there is an urgent need for forest protection. Significant threats to these forest areas include illegal hunting and logging, as well as deforestation and habitat fragmentation driven by large-scale agriculture, road building, hydro-dams and wind farms, over which forest protection authorities have no control.

Despite the significant efforts of law enforcement agencies in Kon Tum, to control illegal hunting, there are still many cases in which animals such as pangolins, bears, primates, and birds are targeted by professional hunters. Wildlife from Kon Plong is often traded to different provinces and cities, placing ever-higher pressure on the forest. There is an urgent need for biodiversity conservation interventions, including civil society collaboration with the government.

Kon Plong’s forests are currently managed for forestry and watershed services, and their significant biodiversity value has until now largely escaped attention. The highest priority now is to legally and actively safeguard one of Vietnam’s last great wild areas as a Protected Area.

This natural heritage is truly a national treasure; populations of animals and plants must be protected and allowed to recover here. The values are intrinsic, but are also profoundly important for people; with forests providing food, medicine, watershed protection, hydrological services, pollination, climate change mitigation (storage of carbon) and disaster risk reduction.

“ With important information on biodiversity recently recorded, Kon Plong forest deserves to be a valuable natural reserve in the Central Highlands. Besides the benefits of nature protection, preserving this area will contribute to improving the value of sustainable tourism for Kon Plong”, said Trinh Le Nguyen – Director of PanNature.

FFI and government counterparts now hope that this last remnant of relatively intact forests can be conserved for future generations. Currently, FFI and GreenViet are working with government partners and local communities to do just that, with the hope of establishing a new and effective Protected Area in the area for better forest management and effective protection. This project was made possible with support from the Leibniz Institute for Zoo and Wildlife Research (IZW), Forest Protection Department, local authorities and communities, and with funding from the Darwin Initiative (UK government), Rainforest Trust and Stiftung Artenschutz.