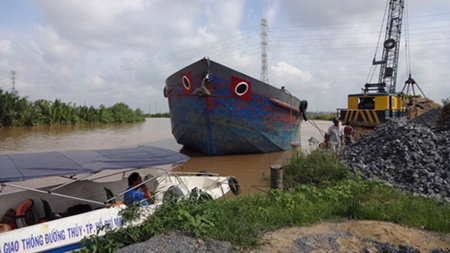 If you want to understand why Vietnam’s environmental problems are so intractable, read the article in the August 23, 2013 edition of Viet Nam News entitled Illegal wharves threaten environment.

The article is about the construction of 46 illegal river wharves (small ports) in HCMC, primarily to load and unload sand. These have clogged up the river, caused landslides, and interfered with water transportation. The local authorities have asked business to vacate the wharves but they’ve been systematically ignored. In July, 31 wharves were “suspended” but it isn’t clear what that means. As of August, of the 46 illegal wharves, only one had stopped operating. According to the HCMC Transport Department, the barrier to effective action is “scant regulation”: Since there is no legislation in place to that would allow the authorities to close down business and the maximum penalty is only VND3,000,000, fines are paid and the rules ignored (arguably a satisfactory outcome for both parties).

This ritual of turning a blind eye to illegal and environmentally damaging developments, followed by half-hearted efforts to address the problem, followed by pleas for more legislation is repeated every day, everywhere in Vietnam.

The basic problem is that while many officials are responsible, none are accountable. Perhaps it’s no coincidence that while there is a Vietnamese word for responsibility (trach nhiem), there is no word for accountability. When forests are illegally cleared, dams collapse, and rivers are heavily polluted, newspaper articles appear explaining that several organizations are responsible for handling the violation but no one is held accountable to finding a permanent solution. Inspections are carried out but no one loses their job, no one is prosecuted, and the problem persists. Nothing, in short, changes and the ritual continues.

In the case of the illegal wharves, the most likely response is a workshop at which riverbank erosion and other human-induced environmental problems can be conveniently blamed on climate change.

Jake Brunner is the Program Coordinator for Vietnam, Cambodia and Myanmar of the International Union for Conservation of Nature (IUCN). The author’s writing reflects his own opinions and does not necessarily reflect the views of PanNature or the organization he’s working with.