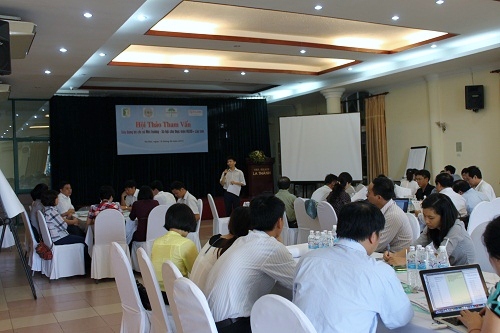 Forecasted global climate changes have the potential to exacerbate existing social vulnerabilities, especially in poorer developing countries, and communities’ and individuals’ ability to cope with these future changes are often conditioned on their ability to access and mobilize natural resources. At the same time, new global policies are in development that would pay countries for “avoided deforestation” through forest conservation efforts known as Reduced Emissions from Degradation and Deforestation (REDD+) in order to sequester carbon and contribute to climate change mitigation. However, as access and use rights to forests change under REDD implementation, this may render some households and communities more vulnerable to the effects of climate change in the long term if REDD policies reduce their adaptive capacity by restricting access to natural resources. Thus, an understanding of the potential outcomes of carbon-credit policies on land use decision-making is necessary before such large scale global programs get more fully underway.

This study will build upon an early REDD development site in Vietnam and explore several questions regarding this new policy. The overall goal of the existing project underway is to understand the ways in which payments for ecosystem services (like carbon) serve to alter land-use decision making by smallholder households in forested areas and evaluate if these land-use decisions increase or reduce overall social and biophysical vulnerability to forecasted climate changes. This current PEER-supported project aims to expand the existing project into new field sites and add additional data collection on environmental conditions. Methodologies and data from the pilot research sites will be shared with an in-country network of stakeholders, and a country-wide index of indicators for REDD will be created to assess at the provincial level in Vietnam the likelihood of meeting conditions of success in REDD. To promote capacity building with local policymakers and NGOs on key REDD issues, short training courses and national workshops will also be organized. This study should contribute to policy-relevant knowledge on social vulnerability to climate change in a country that is likely among the most seriously affected. It also has the potential to influence development of REDD policy, as it may provide a baseline to explain variations in the expected performance of various possible REDD approaches.

During October-December 2013, the research team revised their draft surveys. The Center for Natural Resources and Environmental Studies (CRES), People and Nature Reconciliation (PanNature), and Tropenbos International (TBI) worked with their U.S. partner Prof. Pamela McElwee revising questionnaires for REDD+ Environmental and Social Index (RESI), household livelihoods, focus group discussions, and village authorities. During October 23 – 31, 2013, TBI conducted a field visit to Kien Giang province in the Mekong Delta. Meetings were carried out with local organizations from provincial to community levels to collect relevant data. These included the Forestry Section of the provincial Department of Agriculture and Rural Development (DARD) and representatives of the provincial Department of Natural Resources and Environment (DONRE) in Kien Giang, Vice Director of the Forest Protection Management Board of An Minh-An Bien district, and Kien Ha Forest Management Board in Hon Dat district. During the field trip, a household survey was carried out in Hon Dat, Duong Hoa, and Binh An communes. In order to prepare for the training course planned in 2014, CRES has carried out two surveys on needs assessment at the national and local levels. The survey at the national level was completed, the needs assessment at the local level is being carried out, and CRES is finalizing the survey. The findings of the surveys will help the team develop appropriate teaching modules for a short course on REDD, climate adaptation, and livelihood monitoring for the target groups. During this quarter, CRES, PanNature, and TBI actively participated in several workshops on REDD and climate change. At the workshops, various issues related to provincial REDD+ action plan (PRAP) development were presented and discussed among different local multi-stakeholders, NGOs, and researchers, with particular focus on biodiversity and social safeguards that were identified as key indicators for that development.

In the upcoming months, CRES, PanNature, and TBI will finalize all the surveys and will conduct field research in the new sites, such as Dien Bien, Kon Tum, and Kien Giang in February and March 2014. Research in the old sites such as Lam Dong, Thua Thien Hue and Son La is expected to be conducted in April 2014. CRES will develop teaching modules for a short course on Social Safeguards to take place in Year 3 of the project. PanNature is planning to organize a consultation workshop on RESI index in April 2014 and will also focus on compiling primary and secondary data on the selected RESI indicators from the selected provinces. They are preparing to launch an on-line version of RESI for the pilot provinces in the fourth quarter of Year 2. TBI will develop a livelihoods database and instruments for REDD at a community level and will start preparations for REDD training at a community level in Bi Dup-Nui Ba National Park in Lam Dong province.