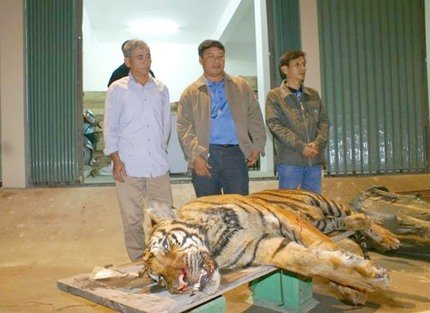 It is estimated that 65,000 hectares of green forests disappear every year. Hundreds of animal and plant species are the aiming points of hunters, while hundreds of wildlife species are on the verge of exhaustion.

The figures were released at a recent workshop on the forest protection coorganized by PanNature, FFI, an international wildlife protection organization and VNPPA, the Vietnamese association of national parks and sanctuaries.

According to Senior Lieutenant Colonel Le Kha Hong from the Ministry of Public Security’s Environment Police Agency, there had been 13.4 hectares of forests nationwide by 2011 with the forest coverage at 40 percent of the total territorial area. This includes 10.3 million hectares of natural forests and 3.1 million hectares of planted forests.

Hong said that competent agencies have noted the high decreases in the forest areas in the last five years, during which 330,000 hectares of forests have disappeared, which means that 65.600 hectares are lost every year.

Forests have been devastated to serve the people’s socio-economic development policy. The forests have to give places to hydropower plants, irrigation works, transport projects and mining industries.

Especially, the forests have been not only devastated by fire, but also by the people’s hand. Illegal lumberjacks have been destroying primeval forests, national forests and natural sanctuaries; because they understand that the rare and precious timber here can bring them a lot of money.

According to Dr Ngo Tien Dung from the Forestry General Department, Vietnam is one of the 16 countries in the world which have high biodiversity level with the wild flora and fauna typical for tropical forests.

However, the wildlife has been in the serious danger. The Vietnamese Red Book in 2007 counted 882 fauna and flora species in the danger, or 161 species higher than that in 1992-1996.

Scientists have said that rarer and more precious species are facing higher danger of being exhausted. Especially, some species now have only 70-200 individuals left.

In April l2010, the dead body of the last Java rhino in Vietnam was found at the Cat Tien National Park. The WWF has announced that one horn rhino has got exhausted in Vietnam, saying that poaching could be the main reason that caused the death of the rhino.

Experts say that though Vietnam has enacted laws and issued legal documents relating to the protection of the forests and wildlife, the law enforcement remains low.

According to Tran Viet Hung, Director of PanNature (*), at Dak Rong Natural Sanctuary, every hunter can use 300-500 rope traps every year. Meanwhile, the tools to trap and hunt for animals have been on sale everywhere. Especially, in the menus given to customers at restaurants, one would see the dishes made of wild animals. Since wild animals have become more and more expensive, people now tend to hold wild animals captive for profit.

Meanwhile, the punishments are not heavy enough to force violators to give up the ideas of killing wild animals. Also according to Hung, of the 27 people arrested in a case relating to a tiger, only four were sentenced to jail, 21 got suspended sentence, and 2 did not bear any kind of punishment.

(*) Tran Viet Hung is the Vice Director of Education for Nature – Vietnam (ENV). This is the error of the author.

(**) The news article is about the recent workshop “The Future of Vietnam’s Special-Use Forests: Perspectives on Policies, Resources, and Laws Enforcement” organized by PanNature, FFI Vietnam, and Vietnam National Parks and Protected Areas Association (VNPPA) on June 15th, 2012.