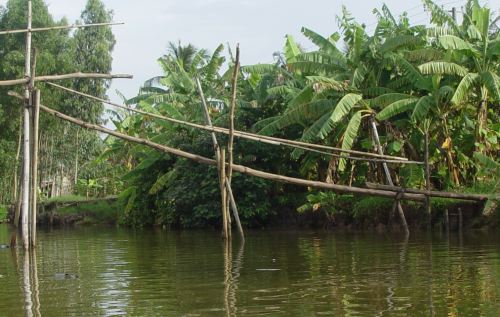 Vietnam could face a fresh water crisis because of poor resource management, a new report says.

It says the problem could be exacerbated by the fact that most of its rivers originate in neighboring countries who could build upstream dams and block their natural flow.

The report was released on May 29 by People and Nature Reconciliation (PanNature) an environmental non-profit organization.

Vietnam has an availability of 830-840 billion cubic meters of freshwater per year on average, including surface and ground water, the report says.

Up to 63 percent of this volume is sourced from neighboring countries. The remaining water availability is around 4,000 cubic meters per person, which could fall to 3,100 cubic meters by 2025.

If the rivers’ upstream countries do not allow fair share and reasonable use of water resources in transnational rivers, Vietnam will face a certain shortage of water.

“It could lead to a freshwater crisis that could threaten sustainable socio-economic growth and food security,” the report says.

It notes that although Vietnam does not belong to the group of countries facing a serious water shortage at present, water availability varies regionally within the country.

The worst water conditions are reported in the provinces of Ninh Thuan, Binh Thuan and the northern mountainous regions.

Meanwhile, climate change has altered the courses of the rivers and changed rainfall patterns in the south-central and southwest regions.

Due to rapid increase in demand, underground water levels in Hanoi and Ho Chi Minh City have fallen by a meter per year on average. The situation is no better in the Central Highlands due to overexploitation of resources for irrigation of coffee plants and other crops.

Availability of fresh water derived from river basins has declined due to high agricultural and industrial usage and high levels of pollution.

The report’s authors propose the establishment and empowerment of river basin commissions to ensure better use of fresh water resources in the country.