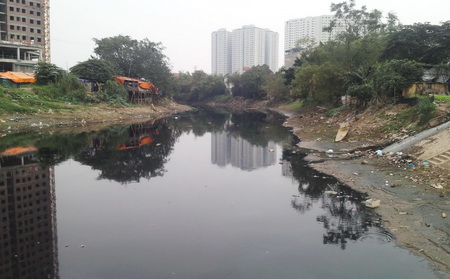 In Vietnam, unsustainable ‘modernization’ too much for sanitation services.

A polluted section of the Nhue River in Hanoi’s Ha Dong District. Experts have urged Vietnam to invest more in sanitation services to reduce pollution. Photo by Ha An

Huynh Thanh Long said he and his neighbors close all their doors and windows whenever they are at home but that doesn’t keep the awful stink from the Ba Bo Canal out of the house.

“Pollution often forms a thick layer of foam on the surface of the flowing water,” said the resident of Ho Chi Minh City’s Thu Duc District.

According to the city’s anti-inundation center, pollution in the canal is a combination of wastewater from residential areas and industrial zones upstream.

“Over the last 20 years, the government of Vietnam has made considerable progress on the provision of wastewater services in urban areas, investing nearly US$250 million annually in recent years,” said Le Duy Hung, a senior urban specialist in Hanoi.

“However, keeping pace with rapid urbanization is challenging and it is estimated that $8.3 billion will be required to provide wastewater services to Vietnam’s urban population between now and 2025,” Hung, who is also a leading researcher at the World Bank’s Vietnam Urban Wastewater Review, wrote in a report released on January 20.

The report focuses on the specific challenges that Vietnam faces as a result of increasing environmental pollution associated with rapid urbanization. It also evaluates the performance of the wastewater sector in Vietnam.

It found that although 60 percent of households dispose of wastewater through a public sewerage system, much of this goes to the drainage system with only 10 percent of the wastewater treated.

Hung said estimated economic losses resulting from poor sanitation stood at $780 million per year, or 1.3 percent of the country’s GDP.

“Financing needs are still very high, estimated at $8.3 billion for sewerage services to an estimated urban population of 36 million by 2025,” he said.

Recently, many farmers in HCMC’s Cu Chi District complained that they do not have water for nearly 400 hectares (988 acres) of rice due to pollution in the Thai Cai and An Ha canals.

They accused the SEPZONE – Linh Trung 3 Industrial Zone of discharging untreated wastewater to pollute the canal.

Vietnam’s first industrial parks opened in 1991 as part of the doi moi reform movement, and there are currently more than 189 industrial parks and 878 export processing zones nationwide in 57 of the country’s total 63 cities and provinces.

Vo Thanh Thu of the Vietnam Chamber of Commerce and Industry’s international trade policy advisory committee said that rapid industrialization over the past 20 years had led to a boom in industrial parks and export processing zones.

However, it has also led to serious pollution, leading to conflicts with local residents.

“Only half have established waste treatment plants,” Thu said at a recent seminar on the issue, organized by the People and Nature Reconciliation (PanNature) a Vietnamese non-profit organization.

Thu said that toxic waste is discharged without treatment, causing serious pollution to the environment.

The committee urged the government to review industrial park and export processing zone zoning plans and encouraged agencies to cooperate to improve the monitoring of environment regulations.

Researchers estimated that investment levels of at least $250 per person are needed annually in the East Asia region over the next 15 years to manage wastewater and septage that is generated by the urban population.

In another World Bank report, entitled East Asia Pacific Region Urban Sanitation Review: Actions Needed, researchers examine what is holding back the sector and recommend ways to expand and improve urban sanitation services in an inclusive and sustainable way in Vietnam, Indonesia and the Philippines.

The region’s rapid urbanization is an engine of economic growth but poor quality sanitation leads to unsustainable development, with economic losses of 1.3, 1.5 and 2.3 percent of GDP in Vietnam, the Philippines and Indonesia, respectively.

“Worldwide, about 2.5 billion people lack adequate sanitation and 660 million of them live in East Asia and the Pacific Region,” said Charles Feinstein, World Bank sector manager for energy and water.

“Inadequate sanitation takes a tremendous toll on the quality of peoples’ lives, the environment, and the economy,” he said. “But the good news is investments in sanitation yield high returns.”

According to the report, poor sanitation has a significant impact on public health in the region including chronic poor health caused by diarrheal disease and an increased risk of disease epidemics such as cholera.

Worldwide, every US dollar invested in sanitation yields $5.50 in return in terms of economic benefits.

In East Asia, this rate of return is even higher, with every US dollar spent yielding $8 in return, according to the World Health Organization.