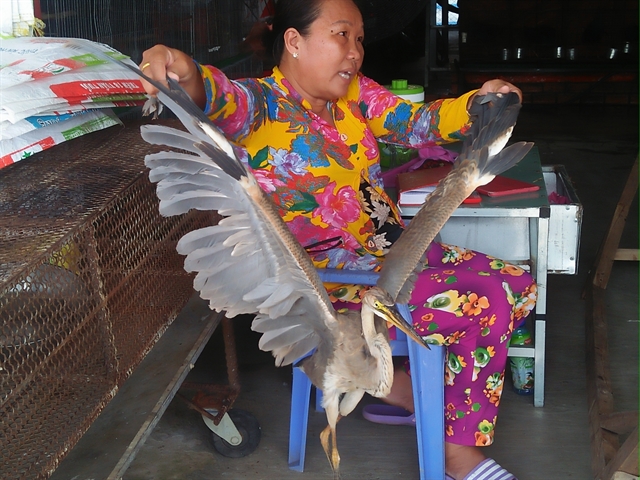 Law enforcement agencies have heeded the call of 14 NGOs working in nature and wildlife conservation and begun cracking down on the illegal wildlife trade at the Th?nh Hóa Farmers Market in southern Long An province.

Education for Nature Vi?t Nam (ENV), one of the NGOs involved, confirmed to Vi?t Nam News that shops displaying live wildlife for sale have been shut down. Notices on wildlife trading violations have also been distributed among the stalls and broadcast at the market recently.

ENV said it is a positive step by the People’s Committee of Long An. The market has long been a center for the illegal wildlife trade with wild birds and animals sold disguised as farm produce for years.

However, ENV said its volunteers are still recording incidents of trading wild bird species — many that have been taken from the wild and have been kept illegally as pets for years.

Director of People and Nature Reconciliation (PanNature), Tr?nh Lê Nguyên, representing the 14 NGOs involved, says the group has sent a proposal to the province asking for the illegal wildlife trade to be shut down completely and as soon as possible.

Nguyên said the province should establish a supervisory team to identify legal certificates of origin among wildlife farms and suppliers to eliminate illegal hunting and/or trading activities.

A toll-free National Wildlife Crime Hotline 1800 1522 launched in 2005, has seen more than 20,000 illegal wildlife violations reported by communities nationwide, according to ENV.

This includes the seizure of 127 turtles, 16 monkeys, one frozen tiger, and one frozen bear, along with 656 ivory products totaling 3.5kg, in May of 2021 alone.

Many advertisements selling live wildlife and meat on Zalo, Facebook, YouTube among other digital forums had been removed, EVN said. 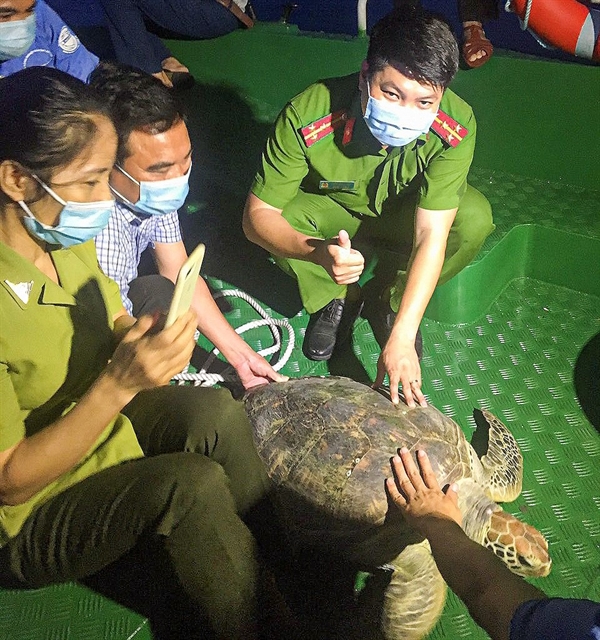 A sea turtle is rescued by law enforcement agencies in Hà T?nh province. A report uveiled that 23 percent of 800 wildlife trade offenders nationwide, from 2010-2020 were from Hà T?nh and Ngh? An provinces. Photo courtesy of ENV

Prison sentences have also been used in conjunction with financial penalties.

Two bear farm owners, that transported the limbs of an Asiatic black bear were fined VN?700 million (US$30,400) by the people’s court of ?? Huoai district in the central highlands of Lâm ??ng Province.

The two men cut off two limbs from a dead bear at their farm but did not report it to local law enforcement agencies.

In June 2021, L?ng S?n became the 40th locality in Vi?t Nam to eliminate bear farms after three captured bears were transferred to a bear rescue center in Tam ??o, run by Animals Asia.

Figures supplied by EVN state that 346 bears have been captured at farms nationwide, of which Hà N?i was responsible for 161 (about 46.5 percent of the country’s total).

Furthermore, a survey commissioned by EVN and carried out in Ngh? An Province found that 97 percent of surveyed local people in the province wanted more strict and heavier punishments for illegal wildlife violations.

ENV said 23 percent of the total 800 offenders related to illegal wildlife violations in 2010-20 were from Hà T?nh and Ngh? An provinces.