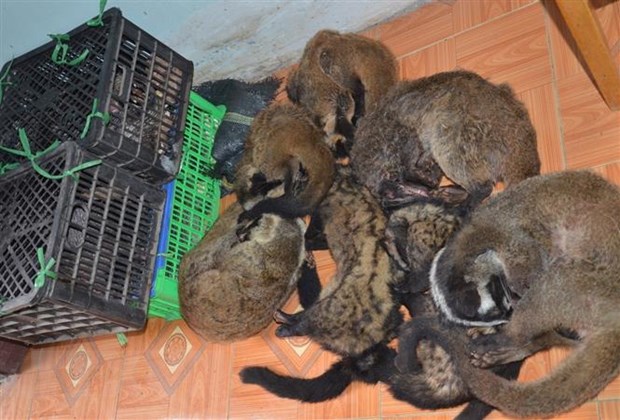 Can you tell us about the trading of animals listed in the Red Book in Viet Nam?

According to the latest data released by the Environmental Impact Assessment (EIA) in 2019, in the last 15 years, some 105.71 tonnes of elephant ivory (from some 15,779 elephants), 1.69 tonnes of rhino horns (from about 619 rhinos), skins and bones from at least 228 tigers and remnants of more than 65,000 dead pangolins were seized in smuggling cases in Viet Nam or related to Viet Nam.

According to a report from the Wildlife Conservation Society – Viet Nam Programme, in the five-year period from January 2013 to December 2017, some 1,500 violation cases of the Law on Wildlife Protection were recorded and almost 1,500 smugglers brought to court.

In the current outbreak of SARS-COV-2, Vietnamese agencies have called on all concerned local agencies to step up their inspection visits and control the smuggling and consumption of wildlife meat to prevent an outbreak.

However, in Viet Nam, the trade of wildlife, including animals listed in the Red Book, has been reported in many localities nationwide. Adding to that, quite a few animal farms have raised wild animals for trading.

What are the reasons behind the trading of animals in the ‘Red Book’ in some parts of Viet Nam, leading to the existence of illegal wildlife markets like the Thanh Hoa market in the southern province of Long An?

Local authorities should be blamed for that, particularly the lack of responsibilities, supervision and inspection.

Apart from forest rangers, we also have environmental police, market watch forces and other authorized agencies being in charge of handling wildlife trade. Legal documents and guidance were issued quite fully. Therefore, law adoption is a basic factor to ensure effective handling of the problem.

What are solutions to deal with the wildlife trade?

In an open letter sent recently to Prime Minister Nguyen Xuan Phuc which was signed by 14 natural conservation organizations, we asked the Vietnamese Government to issue specific measures to close illegal markets and sanction anyone who breached Vietnamese Law.

The Government should ask local authorities and authorized agencies to fully perform their tasks and obligations and they have to take the highest responsibility in case of any wildlife trade happening within their locality.

Strict punishment should be applied for those who helped to cover up the wildlife trade.

Authorized agencies should review the policy to allow the raising of wild animals and regularly inspect wild animal raising establishments to ensure they meet requirements. Particularly, those establishments found to abuse this policy to join the smuggling of wildlife must be closed and strictly punished.

It is also necessary to foster coordination and cooperation among authorized agencies to improve the efficiency of activities aimed at protecting wild animals.

How do non-profit organizations work with Vietnamese agencies to protect animals listed in the Red Book?

Viet Nam has worked closely with international organizations to develop new policies to protect and conserve wild animals from the danger of extinction.

Together with Vietnamese and international non-governmental organizations, we’ll work with the Government to conduct our own supervision activities while working side by side with international NGOs to put a stop to the illegal trading and consumption of wide animal products in Viet Nam.