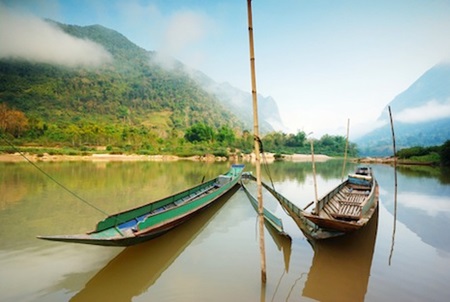 The Mekong is facing a crisis. Climate change and large-scale dams on the Mekong mainstream and tributaries are making Mekong’s flows and levels more unpredictable. From record lows in June and July to major flooding in parts of the basin in August and September, hydropower dams have exacerbated the impacts on the river and people. Large-scale dams, especially those planned for the Mekong mainstream, are a significant cause of – not the answer to – the Mekong crisis.

Instead of taking urgent steps to address the rapid deterioration of the river system’s health and productivity, on which millions of people depend, on 31 July 2019, the Government of Laos formally notified the Mekong River Commission (MRC) of its intention to build yet another large dam on the Mekong mainstream. The Luang Prabang dam is the fifth dam to be submitted for Prior Consultation under MRC Procedures for Notification, Prior Consultation and Agreement (PNPCA).

We therefore call for the Luang Prabang and other planned mainstream dams to be canceled. Rather than embarking on another flawed Prior Consultation process, we urge lower Mekong governments and the MRC to address outstanding concerns regarding impacts of mainstream dams and to undertake a comprehensive options assessment to study alternatives.

Initiating the Prior Consultation for the Luang Prabang dam ignores the extensive scientific evidence published by MRC and others pointing to negative and irreversible basin-wide impacts that mainstream dams will produce. If built, Luang Prabang dam, combined with Pak Beng, Xayaburi and Pak Lay dams, would complete the transformation of the Mekong River along the entire stretch of northern Laos into a series of stepped lakes, resulting in major and irreversible damage to the health and productivity of the river. This means that the wide range of economic and social benefits that the river provides to society will be lost, and the river will become a water channel for electricity generation, primarily benefiting hydropower companies.

Prior Consultation processes for four mainstream dams – Xayaburi (2010-2011), Don Sahong (2014-2015), Pak Beng (2016-2017) and Pak Lay (2018-2019) – have to date largely failed to address concerns over impacts and requests for further studies and information. Given the serious flaws in Prior Consultation processes to date, without substantial reform, there is little indication that a new Prior Consultation process for Luang Prabang dam will be any different from past experience or that it will be able to ensure minimum standards of transparency and accountability, let alone meaningful participation for affected communities, civil society and the general public.

Vietnam must re-consider its involvement in Luang Prabang dam

PV Power, subsidiary of state-owned Petro Vietnam (PVN), is the lead developer of the Luang Prabang dam. The involvement of a Vietnamese state-owned company is incongruous with repeated concerns expressed by the Vietnamese Government during the Prior Consultation processes for mainstream dams to date. Citing concerns over the impacts on the Mekong Delta, during the Xayaburi Prior Consultation process, the Vietnamese Government had called for Xayaburi and other planned mainstream dams to “be deferred for at least 10 years”. 2

More recently, Vietnam called for greater attention to exploring renewable energy sources as replacements for hydropower in the Mekong Basin, which can contribute to “the protection and sustainable utilization of Mekong water resources as well as preventing negative impacts on people’s livelihoods.”3

Furthermore, PV Power has a poor track record of hydropower projects in Laos. Despite being completed, the Xe Kaman 1 and 3 dams in Southern Laos are not functioning properly and have resulted in major impacts on affected communities.

Given Luang Prabang dam will exacerbate impacts on the Mekong River and Delta, the Vietnamese Government must re-consider its involvement in the project.

The MRC Council Study, which assessed current and potential development plans, clearly shows that series of dams planned on the Mekong and its tributaries pose a serious threat to the ecological health, economic vitality, and food security of the region. With respect to mainstream dams, the MRC Council Study finds connectivity related impacts “are substantial and far-reaching, and overshadow those of all other planned water resource developments in the Lower Mekong Basin.”4

One of the Council Study’s key recommendations is for member governments to seriously consider renewable energy alternatives to large-scale dams. However, there is no indication that these recommendations are being taken up by lower Mekong governments or used to inform decision-making on mainstream dams.

Mainstream dams are not necessary to meet the region’s energy needs. A 2018 MRC summary paper notes that by 2040 Lao plans to export 11,739 MW of power to Thailand, while Thai plans indicate it will only import 4,274MW.5 This difference of nearly 7,500 MW is greater than the combined installed
capacity of all the seven mainstream dams planned or under construction in Laos. 6

More sustainable and equitable energy options and pathways which respect the rights of communities and meet the region’s water and energy needs are available. There is huge potential for energy efficiency and non-hydro-renewables in the region. A comprehensive options assessment can help identify more sustainable and equitable energy pathways and options for the region, which don’t require the destruction of river systems that millions depend on for their livelihoods.

Save the Mekong Coalition
8 October 2019