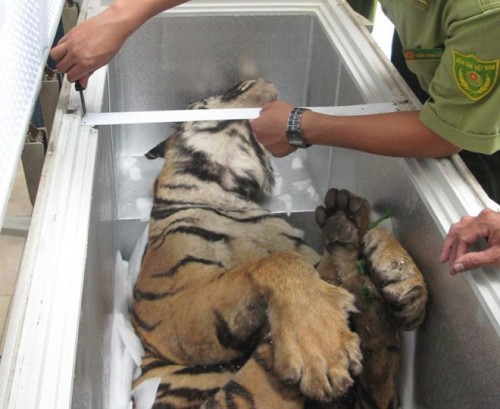 Experts discussed Vietnam’s efforts to protect tigers and other endangered animals at a forum yesterday.

The forum was held in Hanoi by the PanNature and the Wildlife Conservation Society Vietnam in response to International Tiger Day (July 29).

Speaking at the forum, PanNature director Trinh Le Nguyen said after five years of conducting the national programme on tiger conservation, and nine years after the country’s signing of a global commitment of protecting tigers, this year was a suitable moment to review the country’s efforts.

In 2010, at the Global Tiger Summit in Saint Petersburg in Russia, Vietnam, together with 12 other countries home to tiger habitats, committed to doubling the number of tigers in nature by 2022.

To implement the commitment, in 2014 then Prime Minister Nguyen Tien Dung approved the national programme on tiger conservation in 2014-22.

The programme aimed to protect and conserve tigers’ habitats and prey, preventing the decline, gradually recover and increase the number of natural tigers by 2022.

Although there are no official statistics on the number of tigers in nature, the available figures showed the challenges for Vietnam in meeting the global commitment, he said.

Nguyen Thi Van Anh, from the Vietnam Environment Administration under the Ministry of Natural Resources and Environment, explained why the country had failed to meet targets in the global commitment.

She said tigers’ habitats were thick forests or great grassland where they could hunt for different kinds of animals from medium size to small size such as cows, stags or rabbits and ducks. Therefore, the country should restore habitats and increase the number of other animals which are tigers’ preys.

In addition, Vietnam must reinforce laws on wild animals trafficking and raise the community’s awareness.

Benjamin Rawson, an expert from the World Wildlife Fund (WWF), said if the tigers were released into nature, their safety must be ensured.

Vietnam is one of 13 countries with tigers living in nature, however, the population of tigers is declining.

The Sao La Conservation Centre’s statistics showed as many as 110,000 traps has been removed from forests in 2014-19.

Statistics of forest management departments showed the country had more than 100 tigers in 2001.

But 10 years later, the Institute of Ecology and Biological Resources’ study in 2011 showed the number declined sharply to less than 50.

Notably, the updated figure in 2016 of the WWF said that Vietnam had no more than five tigers living in nature and faced high risk of extinction.

Many experts forecast that after the rhino’s extinction in Vietnam in 2010, tigers will follow.