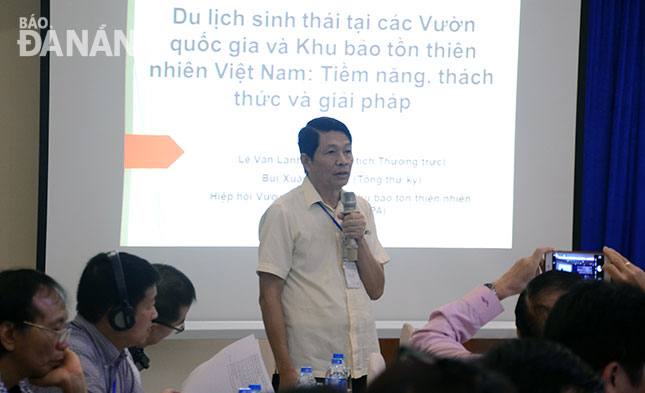 It was jointly organised by the municipal Union of Science and Technology Associations, the Nuoc Viet Xanh (GreenViet) Biodiversity Conservation Centre, the Centre for Humans and Nature (PanNature), and the Environment and Biological Resource Teaching Research Team of the Da Nang University (DN-EBR).

This year’s event took ‘Promoting the tourism development at national parks and natural reserves’ as its theme.

Attending the event were a total of 150 scientists, plus representatives from government departments and agencies, research organisations, universities and businesses from both home and abroad.

The participants discussed solutions to promote the development of eco-tourism at national parks and natural reserves nationwide, and in such tourist sites as Phong Nha and Son Doong caves in Quang Binh Province, the Pu Mat and Yok Don national parks, and the Ly Son and Cham islands.

Also, ways to promote the sustainable tourism development in the Son Tra Peninsula discussed at the event.

Mr Nguyen Quoc Dung from the Forest Inventory and Planning Institute of the Vietnamese Ministry of Agriculture and Rural Development, underlined the significance of expanding the area of special use forests in order to turn the peninsula into a national park. He, however, suggested that the current area of the peninsula should be kept unchanged.

In addition, he highlighted some advantages of turning the peninsula into a national park in ensuring defence and security over the peninsula, sea and islands, as well as in boosting the sustainable tourism development here.

Mr Dung also proposed such types of tourism as eco-tourism, adventure tourism and holiday tourism, along with other activities to promote the sustainable tourism development in the peninsula.

Assoc Prof Dr Miki Yoshizumi from the Ritsumeikan University in Japan suggested that the city authorities should collect eco-tax in the peninsula.

“A tax of 1 EUR per person per day is currently levied on tourists visiting the Balearic islands. The tax is charged on all hotel bills. As a result, the total of eco-taxes collected in the islands hit 45 million EUR every year. Since 2016, the Balearic authorities have doubled the fee charged per night spent in the region. The collected tax will be used to fund projects on environmental improvement and sustainable tourism development in Balearic islands”, Mrs Yoshizumi noted.

Dr Bui Minh Nguyet from the Ha Noi University of Forestry agreed with the suggestion made by the Japanese guest. She proposed that the municipal government should collect eco-tax of between 50,000 and 100,000 VND on each of visitors to the peninsula on a trial basis.

She remarked “If the Da Nang authorities charge each of visitors 50,000 VND eco-tax, a total of 60 billion VND in eco-taxes will be collected per year. The collected money will go to cover the expenses of the management, biodiversity conservation, and the implementation of solutions to reduce the impacts of environmental pollution.”

Mr Le Van Lanh, Vice Chairman of the Viet Nam Association of National Parks and Nature Reserves, also highlighted the significance of combining the biodiversity conservation with the sustainable tourism development in the peninsula.

He added the construction of the InterContinental Danang Sun Peninsula Resort is a typical example. The construction work received high appreciation from domestic and foreign experts thanks to its harmonious combination between architecture and natural landscape.