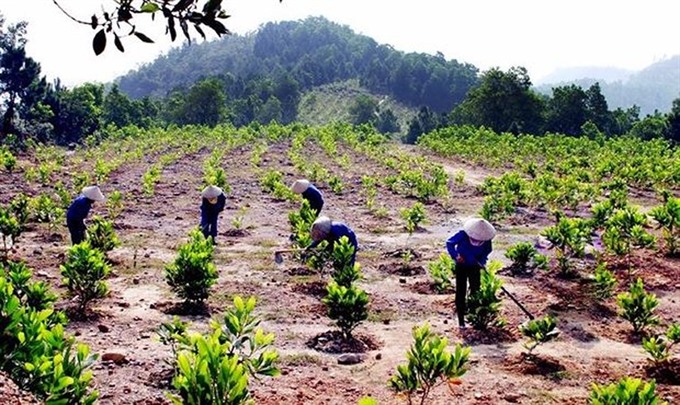 Experts discussed issues related to conditions and factors to promote natural forest restoration in localities and contribute to ensuring ecological security and minimising damage caused by natural disasters and floods during a conference held yesterday in Hanoi.

The conference was held by the People and Nature Reconciliation (PanNature).

Speaking at the conference, professor Nguyen Ngoc Lung, director of the Research Institute for Sustainable Forest Management and Forest Certification (SFMI), said that forests played a major role in the country’s economic development, but its role was currently being hampered because many regions were degraded by the impact of agricultural expansion.

In order to restore natural forests, efforts should be made to prevent deforestation in the face of climate change to create a sustainable development environment for the country, he said.

The total forest area increased slightly, compared to the 14.3 million hectares and 41.19 per cent of cover in 2016.

However, the natural forest area decreased by 5.7ha compared with over 10 million hectares in 2016.

Dr. Tran Lam Dong, Director of the Silviculture Research Institute under the Vietnam Academy of Forest Science, said that although forest areas had increased, the quality of forest decreased.

Even with new forests, the density of trees had fallen, he said.

Dr. Dong said that at present, the rehabilitation of natural forest ecosystems faced many challenges, such as low forest management capacity, or enterprises and households having difficulties accessing capital, seed sources and techniques.

Therefore, there should be supportive and incentive measures to promote forest protection and rehabilitation including training and technology transfer to stakeholders in forest management and restoration.

In a report on strengthening forest management and protection, MARD has set the task of ensuring that 15 per cent of degraded and preserved forest ecosystems are rehabilitated, especially special-use forest systems, and an addition of 100,000ha of special-use forests by 2020.

At the conference, participants discussed issues for forest restoration, set targets and approaches for the rehabilitation of protective forests and programmes to restore natural forests.

They also discussed policies for forest rehabilitation and the role of businesses, communities and households in forest restoration. — VNS