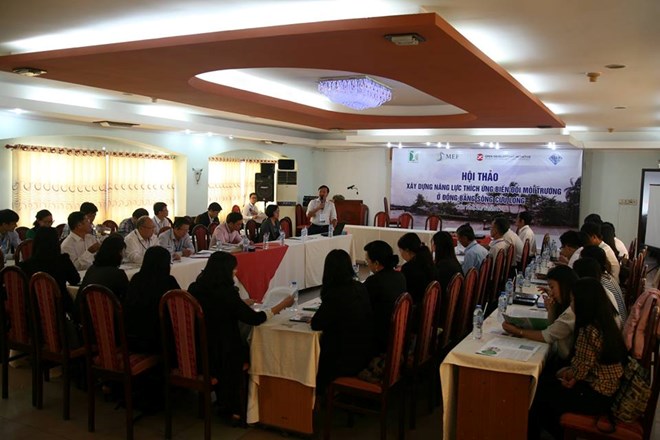 The environment in Mekong Delta is severely being affected by hasher natural disasters, water pollution and natural resources depletion, said a scholar.

At a workshop on climate change adaptation capacity building for the region held in Can Tho city on December 28, Ho Thi Thu Ho from the Can Tho University attributed these issues to global climate change, rough interventions in the Mekong River’s course made by countries along the river, and low environmental awareness of the public.

Agreeing with Ho, Trinh Le Nguyen, Director of the Vietnamese NGO People and Nature Reconciliation (PanNature), pointed to the worst drought in a century that hit the delta last year. In 2017, the region went through its annual flooding season, finding almost no resources coming from the upstream areas, he added.

Upstream dams have led to a reduction of alluvium, thus causing landslides across Ca Mau, An Giang, and Tien Giang, Nguyen said.

Nguyen Minh Quang from the Can Tho University noted that two third of local economic projects pose high risks of pollution, while rapid urbanisation has created more problems in waste treatment.

He suggested communications activities as a solution to raising public awareness and urged stronger actions of the Mekong River Commission against upstream hydropower projects.

Participating experts put forth a number of measures, which included developing farming models suitable to saline environment in Ca Mau and Ben Tre instead of trying to desalinate local water sources.

They also asked the authorities to better handle the issues of rapid urbanisation and migration.

New Freeways a Highway to Hell for Vietnam’s Forests
Vietnam’s forests under threat from new roads and projects as the country grows and expands after the pandemic.
Vietnam Strives to Conserve Endangered Elephant Species
Since 2012, August 12th is recognised as World Elephant Day. World Elephant Day has become an opportunity for everyone to raise awareness about elephant protection and seek solutions to reduce conflicts between elephants and humans; as well as efforts to preserve this species in the wild.
Barriers to Combating the Illegal Trade of WildLife
The Covid 19 pandemic has been upended the world for the last two years, causing dramatic losses of human lives and social and economic disruption. Along with immeasurable losses, the pandemic has also entailed socio-economic changes and humanity's perception of the world we are dwelling in. The virus that causes the Covid-19 pandemic is likely to originate from wild animals. Although this is not a firm conclusion up to this point, it is a deeper warning than ever about the human way of life, which exploits nature indiscriminately, causes ecosystems to deteriorate, and leads to irreversible damages.
Categories
Copyright 2022 PanNature Some Rights Reserved
Back To Top