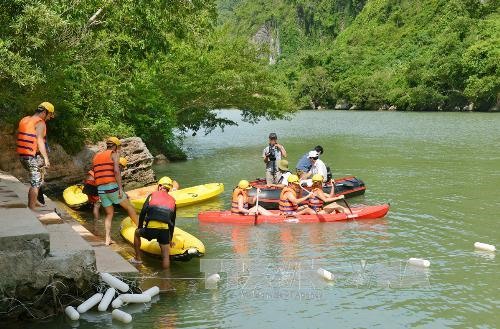 Instead of being wary about investors, tourism management authorities should collaborate with them in preserving the natural environment, says Dr Nguyen Hoang Tri, Secretary of the National Committee for UNESCO’s Man and the Biosphere Programme (MAB) in Viet Nam.

With about 2.3 million hectares of special use forests (SUF), 31 national parks and 68 natural reserves, and dozens of other forests, Viet Nam is seen as a prime eco-tourism destination.

However, rapid and haphazard development of tourism infrastructure in natural reserves and SUFs in the last few years has raised concerns that development was taking place at the expense of the environment.

Tourism inside and around protected areas like the Phong Nha – Ke Bang and Bach Ma National Parks, as well as the Son Tra and Lung Ngoc Hoang natural reserves, has also raised concerns over the loss of biodiversity.

Ways to address these concerns and preserve the nation’s natural environment in the context of an eco-tourism boom were discussed at a conference held in Hà N?i on Wednesday.

Most tourism projects in the country are implemented without conducting comprehensive environmental impact assessments (EIA), said Dr Le Hoang Lan of the Viet Nam Association for Conservation of Nature and Environment. The result is that the risks and consequences that the projects can have on the environment are not accounted for, she said.

Current regulations only require tourism investors to address damage caused to forests by paying money or replanting trees, “but such losses can’t be measured with money, like losing rare animals like rhinos,” Lan said.

“Re-growing forests does not ensure recovery of biodiversity,” she said, adding that regulations should require investors to restore biodiversity in damaged areas.

Overlaps and loopholes in laws and regulations on natural resource management have complicated the task of preserving biodiversity in the country, public policy specialist Nguyen Quang Dong said at the conference.

For example, the 2010 decree on SUF management actually allows investors to engage in activities forbidden by the Law on Forest Protection and Management, he said.

Both the environmental and agricultural ministries have their own guidelines on planning natural reserves for tourism, which are too many, unstructured, and too complicated, he added.

“They need to redefine their functions and untangle this management mess,” he said.

Dr Nguyen Quoc Dung of the Institute of Investigation and Forest Planning, said that management of national parks has been arbitrarily decentralised in some localities.

Instead of being managed by the provincial People’s Committees as regulated, some national parks are being administered by lower-level agricultural and forest protection departments, he said.

Dr Nguyen Hoang Tri, secretary of the National Committee for MAB Viet Nam, said that the private sector, particularly tourism investors, should not be excluded from the policy making process.

“Tourism is an important sector for economic development, and it should be encouraged to grow,” he said.

“Since private investors have their own perspectives on tourism, public management agencies and policy makers should not be ‘scared’ of them, but instead engage them in dialogues and collaborate with them in the task of environmental protection,” he added.

Other experts proposed a comprehensive review and evaluation of environmental preservation and development in the last two decades, so that a more effective legal foundation can be laid for eco-tourism development.

“The carrying capacity of facilities at eco-tourism sites, and the monetary value of biodiversity loss caused by eco-tourism, are the two most difficult factors to evaluate,” said Nguyen Viet Dung, deputy director of People and Nature Reconciliation (PanNature).