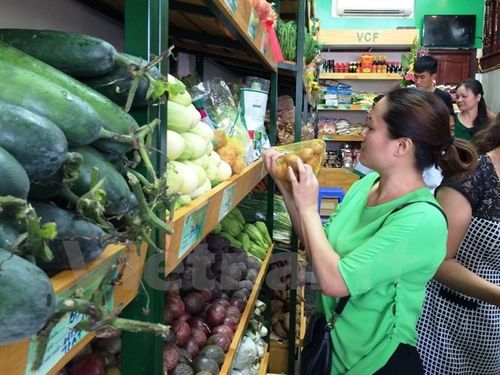 Food demand rises by 20 per cent this time of year, creating opportunities for unsafe food to enter the marketplace.

Forty-five localities in the country are collaborating with 380 supply chains to deliver safe vegetables, fruits, meat, eggs, rice and seafood. However, developing safe food supply chains and providing citizens with safe food has been a struggle.

Food quality management has only touched the tip of the iceberg in terms of market supervision and does not cover the production phase.

Only 0.6 per cent of slaughterhouses in the country are legally operated, far from residential areas, and meet the hygiene standards for food safety. In other words, most of the food sold is not controlled.

Inspections by the Ha Noi Department of Agricultural and Rural Development showed that several vegetable products labeled as “safe” at supermarkets and trade centres had not been certified by specialised authorities, said Nguyen Thi Hang, deputy chief inspector of the department.

In 2016, the department confiscated and destroyed thousands of tonnes of uncertified “safe” seafood, beef, pork and buffalo meat at credible stores, she said.

Some 1,800 agricultural products are being sold at 142 distribution stores a year after developing a vegetable and meat supply chain for the capital’s citizens, according to Chu Phu My, director of the agricultural department.

However, the price of safe food is often much higher than uncertified food, making it difficult to sell. A number of distribution stores closed down after struggling to sell the safe food.

To have stable quality, good service and reasonable prices and maintain their businesses, several owners of safe food stores said that the Government should give them preferential tax policies and pricing support, as well as developing safe agricultural models and applying measures to control food from production to distribution.

Agricultural co-operatives and farm owners should inspect food quality at their outlets, he added. They should end contracts with the outlets and report to the authorities if they detect unsafe food in the stores labeled as safe food brands, he said.

The Ha Noi-based Centre for media in Educating Community (MEC) reported at a talk on food safety that until this month, only seven of 31 websites of agencies responsible for the issue publicised lists of food violations and violators.

According to the Law on handling administrative violations, food safety violations–as well as a litany of other violations–with serious consequences or bad social impact must be publicly broadcast by relevant agencies.

The public notifications must be made on the websites or newspapers of ministerial -level or provincial department-level management agencies or the provincial –level People’s Committees of localities where the violations are committed.

Speaking at the discussion organised by MEC and the People and Nature Reconciliation (PanNature), lawyer Tran Thu Nam said that there had neither been sanctions nor punishments for State agencies that did not publicise food-relating violations on their websites.

Meanwhile, public notifications could be a punishment stronger than any administrative fine to violators, as notoriety could hurt business, he said.