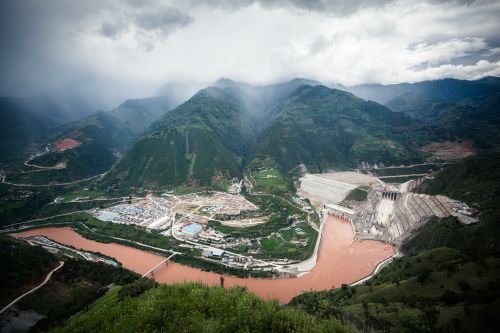 Climate change is expected to increase global competition for water

Under President Xi Jinping, China has been aggressively asserting claims to most of the South China Sea, angering neighbors by turning specks of rock into artificial islands. Another water fight could be just as explosive: this one involving fresh water.

On Oct. 1, China said a hydropower project in Tibet was diverting water from a tributary of the Brahmaputra River, which flows into India and Bangladesh, reigniting concern over China’s control of some of the region’s biggest waterways that have provided irrigation, transport and life for millennia to much of South and Southeast Asia.

India, which fought a war with China in 1962 over a disputed border, is concerned that Beijing could use water as a strategic weapon. Six of Asia’s 10 biggest rivers originate in China, including the Brahmaputra.

“India sees red in China’s dam building overdrive,” wrote Rajaram Panda, visiting professor at Japan’s Reitaku University, in a commentary this month in the Eurasia Review. “If China diverts the river, it could have devastating consequences for India’s northeastern plains and also for Bangladesh, either with floods or reduced water flow.”

Indian concerns about China turning off of the tap are nothing more than an “imaginary ‘water war,’” according to the Global Times, a newspaper affiliated with the Communist Party’s People’s Daily.

But as climate change leads to more extreme weather conditions, demand for fresh water is going to stoke more tensions, said William Laurance, director of the Centre for Tropical Environmental and Sustainability Science at James Cook University in Cairns, Australia.

“Water issues are about as big as they get,” he said. “China rarely does things halfway—and if they have large-scale agricultural development and giant investments, they’re not going to sacrifice their needs for another nation downstream.”

In Southeast Asia, the problem will probably get worse on the Mekong River, which originates in the Tibetan plateau and flows from China to Myanmar, Thailand, Laos, Cambodia and Vietnam.

China has at least six big hydropower dams on the river and plans to build more. In March, it agreed to release water from its Jinghong Hydropower Station on the Mekong to help drought-stricken countries downriver.

Now Laos is moving ahead with two big projects despite concern from neighboring countries, which could lead to a “domino effect” of other nations building their own projects, said Trinh Le Nguyen, executive director of Vietnamese not-for-profit organization PanNature.

In the past, countries could turn to the Mekong River Commission, a multinational group formed by Cambodia, Laos, Thailand and Vietnam in 1995 to provide a platform for water diplomacy. However, the MRC doesn’t have the power to regulate use of the river, and China isn’t a member.

“We don’t have many expectations for the MRC,” said Satomi Higashi, Laos program director for Mekong Watch Japan, a Tokyo-based NGO. “It doesn’t have an ability to manage the power balance of the member countries.”

An alternative could be the Lancang-Mekong Cooperation group, a Chinese-backed forum that includes the four downstream Mekong countries as well as China and Myanmar. (Lancang is the name of the Mekong in China.)

In March, China hosted an LMC meeting with the theme “Shared River, Shared Future,” and proposed $1.5 billion of loans and up to $10 billion in credit lines for infrastructure and other projects. “China’s neighborhood diplomacy,” the official Xinhua news agency said in a commentary published on Oct. 23, will “contribute to peace and prosperity of the region.”

Some aren’t convinced about the benefits to China’s neighbors in terms of the water supply.

China’s hydropower projects on the upper reaches of the river tilt the balance of power in its favor, said Nguyen Thi Hong Van, National Coordinator for the Vietnam Rivers Network at the Center for Water Resource Conservation and Development in Hanoi. “We were surprised they didn’t try to cooperate with lower Mekong countries before,” she said. “Now it’s too late.”

The LMC “is about China’s economic influence in the region, rather than an effort to share and manage the water from the Mekong,” said PanNature’s Trinh. China, he added, is trying to boost its clout through the new, Chinese-backed Asian Infrastructure Investment Bank and President Xi Jinping’s calls to revive the old Silk Road trading routes.

“They hold the upstream water and they have a lot of money,” Trinh said. “The future looks very dark to us.” 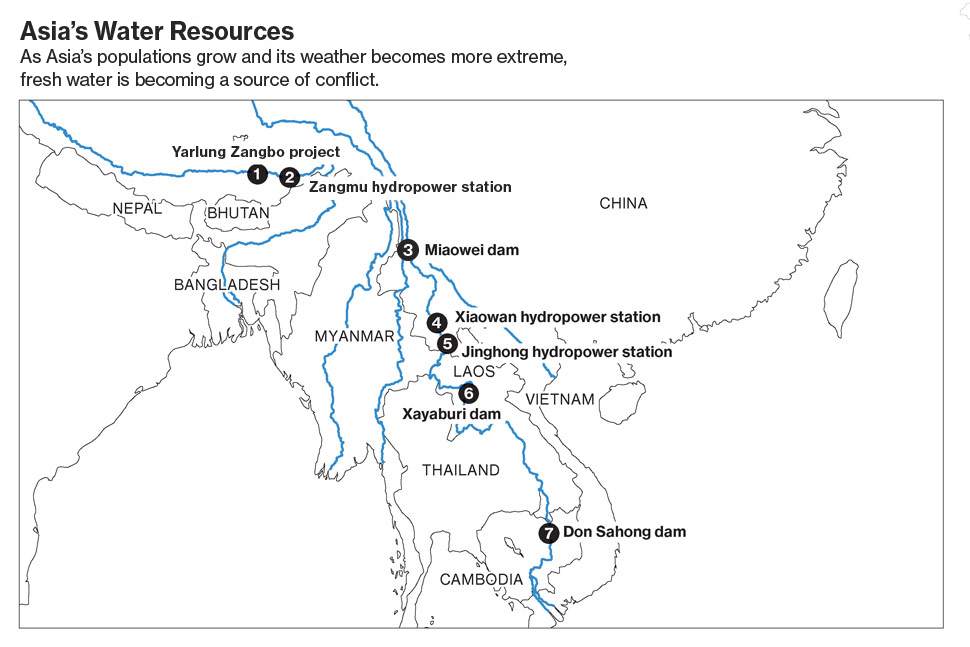 On Oct. 1 China said it’s blocking a tributary of the Brahmaputra (known in China as the Yarlung Zangbo) for a $740 million project to be completed in 2019. The Chinese media dismissed foreign concerns about “an imaginary water war.”

At a height of 292 meters, the Xiaowan hydropower station (completed in 2010) in southwest China’s Yunnan Province is one of the tallest dams in the world.

Jinghong hydropower station on the Chinese part of the Mekong River. In March China agreed to release water to help drought-stricken countries downriver.

Laos has approved the Xayaburi and Don Sahong dams on the Mekong. But Vietnam has objected, saying they will disrupt fisheries and river flow.

The Mekong River flows through southern China, along the Laotian border with Myanmar and Thailand, through sections of Laos, then through Cambodia and Vietnam before emptying in the South China Sea.