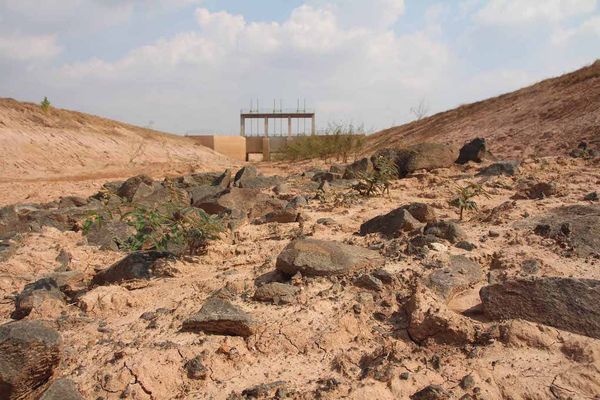 Located at the end of the Mekong River basin, the Mekong Delta in Vietnam is currently experiencing the most severe drought and salinity intrusion in 100 years.

According to experts, the principal reason is development activities in Greater Mekong Subregion (GMS) countries related to the use of the Mekong River’s water resources, including the operation and construction of mega-dams along the river as well as water diversion for agricultural purposes.

Thus far, after months of struggling in a record-breaking drought, millions of farmers in the Mekong Delta have succumbed to exhaustion, due to significant losses of crops, fruits and aquaculture. Part Two of the series examines the impacts of dam construction and other projects on the Mekong Delta.

Ban Klang is a 400-year old village in Chiang Khan district, Loei province, Thailand. The village, home to more than 1,000 residents, is located next to Loei’s river mouth, connecting the tributary to mainstream of the Mekong River. The village is famous as a peaceful destination for tourists.

However, upon entering Ban Klang in recent times, visitors are surprised to notice banners hanging in-front of residents’ houses throughout the town, declaring “No Si Song Rak water gate here” and “Ban Klang residents do not need Si Song Rak water gate.” These are just examples of the rising water conflict in the Mekong region.

Loei river, a tributary of Mekong mainstream, is only a slim waterway, like a silk thread weaving near Ban Klang. However, the Loei is also the start of an ambitious irrigation project called Kong – Loei – Chi – Mun, which would divert water from the Mekong River into tunnels.

According to the Royal Irrigation Department (RID) of Thailand, this irrigation-by-gravity project will divert four billion cubic meters from Mekong River per year. The Loei River’s surface would be widened to 450 meters and 250 meters on the riverbed, while the river’s depth will be 5 meters and the length will be increased by 29 kilometers. A manmade canal will run parallel to the river, transporting water to 24 tunnels under the riverbed, each 10 meters in diameter.

The tunnels will end at two reservoirs: Huai Luang (in Nong Khai) and Ubol Rattana (in Khon Khaen), providing irrigation for 30.6 million rai (about 5 million hectares) in 17 provinces.

Dom Nak Prean water gate, at Koh Sotin district, Kampong Cham province, is relatively eye-catching under the burning sunshine of summer in Cambodia. A stream sparks behind the water gate, providing a stark contrast to the cracking, dry land in front of it.

The stream was pumped from Preah Samdei, a tributary of the Mekong River. A twin damper valve blocked the river’s waters from backflowing to the Mekong. With the help of gravity, water runs from Preah Samdei to Kanpeak Lake (boeung Kanpeak in Khmer), which has an active volume of 100 million cubic meters.

During the dry season, water is released from the lake, via two canals which are between 44 and 55 meters wide and between 18 and 25 meters deep, to the provinces of Kampong Cham, Prey Veng, and Svay Reng.

Dom Nak Prean water gate is an important component of the Vaico project – the largest irrigation development in Cambodia. It was estimated that the project would cost US$200 million – financed by concessional loans from China – and irrigate 300,000 hectares of rice fields in Kampong Cham, Prey Veng, and Svay Rieng provinces.

When I visited Kanpeak reservoir, workmen’s huts and construction equipment for the project still stood nearby the canal bank. Mr. Charn Chan, 49, a local resident, was hired as a security guard and shared with me that the project has been operational since  2014.

Similar to northeast Thailand, rice cultivation in Cambodia is monoculture in the wet season. The Vaico project bears considerable expectations of the Cambodian government, with the first phase costing US$99.9 million and irrigating an estimated 108,300 hectares of rice fields during the wet season and 27,100 hectares during the dry season. This means that monoculture farming of rice would occur twice a year – an important step to realize Prime Minister Hun Sen’s ambition of “changing Cambodia to one of leading rice exporters in the world.”

Since 2003, with the “irrigation government” slogan, Hun Sen has been making efforts to raise funding from international aid agencies to restore and construct the irrigation network. By June 2014, the prime minister’s achievements were one reservoir, four pumping stations, and 117 kilometers of canals completed in the provinces of Takeo, Kampot and Kampong Thom.

A report by the Asian Development Bank stated that 261,000 hectares of rice fields in Cambodia are currently irrigated, and only 16,700 hectares plant three crops per year. This number may rise to 378,000 hectares and 21,100 hectares in the next 20 years, respectively. By 2019, Cambodia will invest in 13 irrigation projects.

However, the impact of these projects is quite questionable and concerning.

I drove along two main canals of the Vaico project. The water levels inside the canals were low, certainly not enough to reach the rice fields along the two banks. It seemed that both canals had been dry for a long time.

Mr Son Rarit, 43, a local policeman of Risengsay, Sithor Kandal district, Prey Veng province, revealed that the canals can only provide water for irrigation from August to February.

“There has been no rain for months. Canals do not help us much. We still exercise the same monoculture farming practices as before!” Son said as he sighed.

Potential threats to the Mekong Delta

“Obviously, the Mekong Delta has been confronting many obstacles and threats, such as irrigation projects that keep or divert water from the Mekong River,” admitted Nguyen Nhan Quang, a leading expert in water management based in Hanoi.

According to Quang, diverting water from the Mekong River via a canal system (such as the irrigation system in northeast Thailand) can adversely affect to the Mekong Delta in Vietnam, even during the rainy season. The cumulative impact will be more damaging if the Mekong’s tributaries in Thailand divert water to reservoirs. Furthermore, it is even more challenging for Vietnam if Thailand and Cambodia take water during the dry season.

“Besides water, the Mekong River carries millions of tons of sediment to the Mekong Delta, playing an important role in shaping the ground and soil of the Delta. If the dams and the reservoirs block the flow of the river, sediment is also trapped, and the delta will sink, gradually,” Thien explained.

Mr. Ky Quang Vinh, head of the Can Tho climate change office in the heart of the Mekong Delta, further explained that El Nino is one of the reasons the delta is experiencing drought and salinization of the water. However, the many dams and diversion projects for irrigation along the river have also been a key factor.

“For years, Greater Mekong Subregion countries only use water for their own demand, without considering or caring too much for their neighbors. It is important that benefits from the Mekong River are shared equally among the whole basin, lessening the tension in the region.”

“It is time for all six of the countries in the Mekong basin to set up an effective mechanism for water management. In particular, the rights and interests of each must be accompanied with responsibility and obligations, in the same spirit of cooperation for development,” Vinh stressed.

Part One: A Thirsty Mekong Delta

This story was produced in cooperation among PanNature, The Mekong Eye and Mekong Matters Journalism Network, with full editorial control to the journalist.