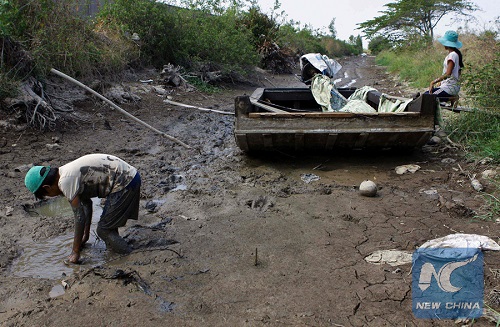 China has started to discharge water into the lower reaches of the Mekong River to alleviate drought in Cambodia, Laos, Myanmar, Thailand and Vietnam, as a major gesture before the first Lancang-Mekong cooperation (LMC) leaders’ meeting to be held in late March.

Vietnam has asked China to increase water discharge flow from the hydropower station in China’s southwest province of Yunnan to help overcome the drought in the Mekong Delta.

Mekong River originates in China and runs through Myanmar, Laos, Thailand, Cambodia and Vietnam, serving as a natural bond between the six countries. Its Chinese stretch is called the Lancang River.

Since late 2015, countries along the Lancang-Mekong River have been suffering droughts of varying degrees due to the impact of the El Nino phenomenon, said Lu, adding that the situation has worsened recently and threatens people’s livelihood.

“In order to accommodate the concerns of countries at the lower reach of the Mekong River, the Chinese government decides to overcome its own difficulties to offer emergency water flows,” Lu said.

Water resources cooperation is an important component of the cooperation mechanism being worked on by China and other Mekong River countries, he said.

Proposed by Chinese Premier Li Keqiang in November 2014 when he attended the 17th China-ASEAN leaders’ meeting, the LMC framework was officially launched in November last year.

Although the mechanism is still at an early stage, attention has been paid to the development of the LMC framework as well as ongoing discussions, said Trinh Le Nguyen, executive director of People and Nature Reconciliation, a Vietnamese nonprofit organization, in an exclusive interview with Xinhua.

“China is willing to enhance coordination and practical cooperation with related countries in accordance with the mechanism in water resources management and disaster response to benefit the people in the region,” Lu said.

“Severe drought and salt intrusion in the Mekong Delta is affecting” 39 out of 63 provinces in Vietnam, according to UN officials in Vietnam.

As of March 10, an estimated 195,200 families did not have sufficient water supply to meet their daily needs, said UN Spokesman Stephane Dujarric on Monday at a daily news briefing. “Some 10 provinces have declared a state of emergency.”

The ongoing serious drought is damaging some 160,000 hectares of paddy rice in Vietnam’s Mekong Delta, causing losses of some 5,000 billion Vietnamese dong (222.2 million U.S. dollars), and affecting about 290,000 hectares of fruit trees, according to local media.

Parts of the delta have been experiencing the most serious drought and saltwater encroachment in the past nearly 100 years.

The delta needs some 4 billion U.S. dollars to effectively deal with the drought and saltwater encroachment, according to the Vietnamese Ministry of Agriculture and Rural Development.