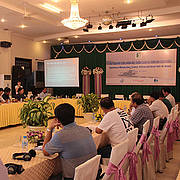 On November 10, BRIDGE financed a training workshop entitled Reporting on Mekong Dams – Science, Policies and Voices from the Ground in An Giang Province in the Mekong Delta. It was organized by PanNature, a Vietnamese NGO, to brief journalists on the concerns and perspectives of local stakeholders on planned dams on the Mekong River. Thirty journalists from national and provincial newspapers and radio and television agencies in the delta attended, as will as representatives from academia and NGOs from Vietnam and other Mekong countries. The workshop report is available HERE.