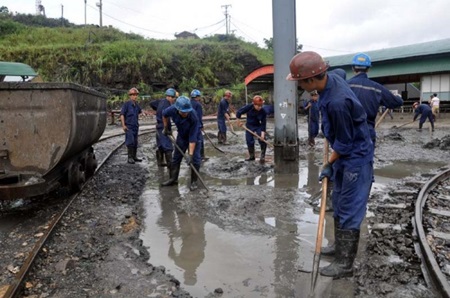 Experts at a seminar here yesterday issued warnings about the uncontrolled exploitation of coal in Quang Ninh Province.

The seminar was held by the People and Nature Reconciliation (PanNature) shortly after the heaviest rains in 40 years hit the province, causing flooding, landslides and toxic sludge spills from open-cut mines.

The torrential caused sludge to flow into local communities and into Ha Long Bay, creating immediate and ongoing health and environmental hazards.

Do Thanh Bai, a member of the Chemical Society of Viet Nam, said the over exploitation of coal had created big changes in the province’s geomorphology. He said this caused severe damage to the economy and to the environment.

“Water pollution has become alarming,” Bai said. “Coal contains a lot of sulphur, which quickly pollutes water. In some areas, it also contains acid and heavy metals such as lead, zinc and mercury.

“This dissolves in the water, polluting the waters of Ha Long Bay. Water pollution also degrades soil in the province.”

Dr. Dao Trong Tu, director of the Centre for Sustainable Development of Water Resources and Adaptation to Climate Change (CEWAREC), said the coal-run Mao Khe Thermal Power Plant had heavily polluted the Gao River and caused huge impacts in the communes of Trang An and Xuan Son in Dong Trieu district.

Dr Tu said authorities had not found a sustainable solution to deal with the pollution in the stream.

Most mines run by the Viet Nam Coal Corporation are open cuts, meaning they are open to the air.

Cam Pha city stores the biggest quantity of sludge from the mines, about 60 million to 70 million cubic metres per year.

Bai said that to protect the environment, residue should be klept in a separate area from homes.Trees should be planted in between to limit pollution instead of simply covering the residue with canvas, which showed negligence by the investor and local authorities.

Bai said when the area was hit by floods, sludge from the mines washed into the local communities. He said it was important that the province restructure deposits of coal residue. — VNS

Dao Trong Hung from the Viet Nam Academy of Science and Technology, said that coal residue at Hoa Khanh district was 300m high, adding that this posed a threat to Ha Long Bay.

He said it was that Ha Long Bay was surrounded by thousands of hectares of open-face coal mines and multiple coal-fired power plants.

“I am afraid for the biodiversity of the bay. The toxins in the water will destroy various kind of aquatic life”, said Hung.

“Until now, the management board of the bay has not found an efficient solution to eradicate pollution.”