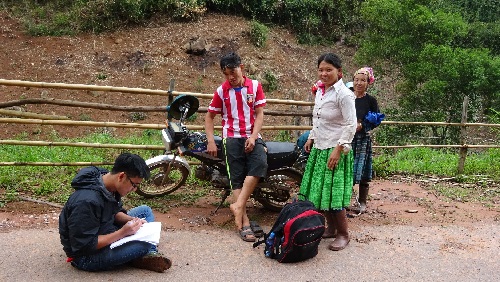 Women play the key role in management and utilization of natural resources in general, and forest resources in particular. However, gender inequality in resource management is still common in many places, especially in rural areas – home of ethnic minority people.

In order to promote gender equality in management and utilization of forest resources, since February to August 2015, PanNature has been conducting Project “Improve role of ethnic women in forest management and their fair access to forest resources in Xuan Nha Nature Reserve, Son La province”, with support from GREEN Mekong Challenge Fund.

Assessment on ethnic women’s needs and roles in management and utilization of non-timber forest products (NTFPs) in 2 communes has been conducted in this April. With support from Xuan Nha Nature Reserve staff and Woman’s Unions of 2 communes, 30 village ethnic women, members of the Woman’s Unions has been interviewed.

Besides, the survey also included in-depth interview of other 30 ethnic women in their houses or on their way to exploite NTFPs. Information from their answers helps understanding current status and issues of NTFP extracted and used by local women.

Based on the survey results, the project will facilitate commune Woman’s Unions to raise their voice in forest management and NTFPs uses dialogues with Xuan Nha Nature Reserve. These dialogues are expected to promote better role of the local women in forest resources management and protection.