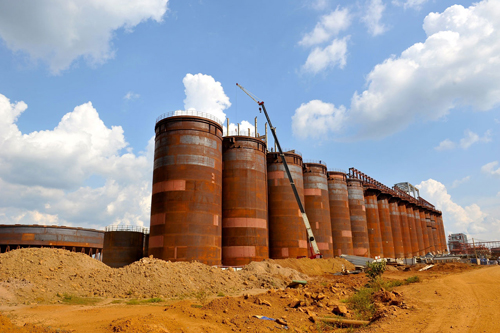 The warning about losses that could be incurred by the two bauxite projects in the Central Highlands has become a reality. The Tan Rai bauxite project is predicted to take a loss of VND460 billion in the first three years of operation, while Nhan Co would incur a loss of VND3 trillion over six years.

Tuoi Tre newspaper quoted experts as saying that Vinacomin (the Vietnam Coal and Mineral Industries Group), the investor of the projects, has “fallen into a trap” set by Chinese contractors.

Dr. Nguyen Thanh Son, former director of the Red River Delta Coal Mining Management Board, pointed out that Vinacomin did not hire consultants to make bidding documents, technical design and other works.

“Vinacomin thought it would be able to save money if it did things itself. But this would make it more costly,” he said.

Nguyen Van Ban, former head of Alumina Division of the Vietnam Minerals Corporation, noted that at first, Chinese bid a very low price to win the bid, but then raised prices after being chosen by Vinacomin.

While Chinese technology only collect 85 percent of alumina from refined ores, modern technologies allow 87 percent. As such, with the capacity of 630,000 tons a year, the loss would be up to $40 million a year.

Other scientists also gave the same warnings at a workshop on March 28 held by PanNature, a non-profit people and nature reconciliation organization belonging to the Vietnam Union of Science and Technology Associations (VUSTA).

In fact, experts have warned many times that the two bauxite projects would take losses.

The loss was 20 percent in 2013 and then rose to 21 percent in 2014. Meanwhile, the figure is estimated at 14 percent if the factories produce 660,000 tons of products as planned. The loss would be nearly the same even if the output were lower.

Dr. Ho Uy Liem from VUSTA has suggested setting up independent science councils which comprise experts with deep understanding about mining technology, and economists and specialists in related fields so as to make assessment about the two projects.

The conclusions to be made by the science councils would provide necessary information to the government to decide whether to continue project implementation.

Liem noted that both the choices – continuing and discontinuing the projects – would be bad, and what the investor needs to do is choose what is “less bad”.