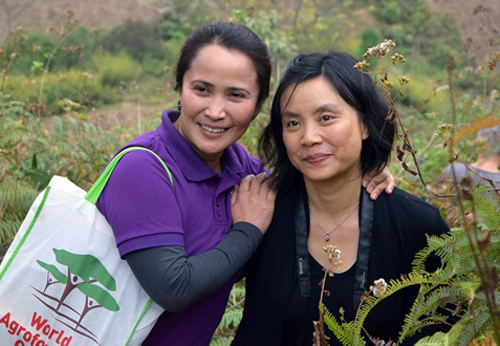 The Australian Centre for International Agricultural Research (ACIAR) has a mission to bring Australian scientists to Viet Nam and engage in collaborative research to help smallholding farmers.

‘We focus on the Northwest, South-central Coast and part of the Mekong Delta’, said Ms Nguyen Thi Thanh An, ACIAR’s country manager for Viet Nam.

These are among the poorest areas in Viet Nam and are home to farmers from ethnic minorities who don’t have good access to markets or the other opportunities enjoyed by farmers closer to Hanoi or Ho Chi Minh City. ACIAR supports projects in all three regions, including the Agroforestry for Livelihoods of Smallholder Farmers in Northwest Viet Nam(AFLI) project, which is led by the World Agroforestry Centre (ICRAF).

‘For example, we have several projects in the Northwest’, elaborated Ms Nguyen. ‘Apart from the AFLI project, we have one project on counter-seasonal vegetables in Son La; we have a beef-cattle project in Son La and Dien Bien provinces; and we recently had a maize and fruit on sloping land project in Son La and Lai Chau. If you count Lao Cai as part of the Northwest, then we have vegetable projects in that area, as well’.

‘I think AFLI is a good project’, said Ms Nguyen, ‘because ACIAR is really interested in agroforestry systems for smallholders. The most impressive aspect of my recent field trip to the sites was that the partnerships are very strong and the local DARDs are very active in the project. For example, Madam Liu from Yen Bai DARD brought two vice-directors along on the field trip: one from DARD and another from Science and Technology. They were particularly interested in the project and wanted to learn from it’.

AFLI has only 18 months to run and this period is very important. It’s when the research bears fruit, literally, and the project team focuses on sharing the results more widely so that a greater number of farmers will be able to benefit.

‘I saw from the trip that the organizers had already informed a large number of different audiences’, said Ms Nguyen, ‘such as potential next-users, like a totally new district in Dien Bien, and some NGOs, namely Agricultural Development Denmark Asia and Pan Nature, who haven’t worked with the project before but can take the results and do some trials on new systems for their districts or projects’.

In 2015, ACIAR has 16 active projects in Viet Nam and around seven new ones in development, most of which have components in different countries: for example, sites in Viet Nam plus sites in Myanmar, Lao or another ASEAN country. One reason for the cross-border focus is to maximise use of research resources while another is to support Mekong sub-regional connectivity.

‘It makes sense when we have a project in different parts of the region: they can supplement each other’, said Ms Nguyen. ‘For example, with maize on sloping land we work in Viet Nam, Lao and Myanmar because the issues are complementary. Another project still under development is forestry policy for plantations, in which we would work across the borders of Lao and Viet Nam’.

Another important part of ACIAR projects is human resource development. Each project focuses on building the capacity of researchers, of farmers who are involved in trials and also of traders who are involved in the agricultural value chains. Occasionally, the project work is supported by external courses such as agribusiness master classes.

In the past, ACIAR has determined its priorities in consultation with the Government of Viet Nam and through sectoral and regional workshops, for example, in 2008 for the Northwest and the South-central Coast, in 2011 for the fisheries sector, and in 2013 for forestry.

‘But this year’, said Ms Nguyen, ‘we will hold a country consultation so that we can get an overview of all the sectors and regions’ needs. We very much look forward to hearing from ICRAF given its global expertise, good partner network, experience in the field and close working relationship with ACIAR’.