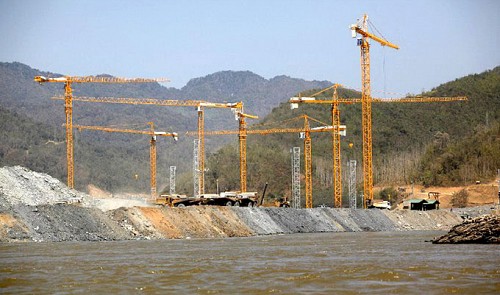 Laos has officially announced its plan to develop the Don Sahong hydropower project on the Mekong River, and this project will be seriously affect Vietnam’s agriculture and aquatic resources in the Mekong Delta region, experts have warned.

The warning was released at the workshop “Don Sahong hydropower project and challenges for Vietnam”, which was held on Wednesday by People and Nature Reconciliation (PanNature), a Vietnamese not-for-profit organization dedicated to protecting diversity of life and improving human well-being by applying feasible, nature-friendly solutions to environmental and sustainable development issues.

Addressing the event, Nguyen Nhan Quang, a former deputy general secretary of the Vietnam Mekong River Commission, noted that in September 2013, Laos only issues a notice on its intention to build a hydropower plant on the river, instead consulting countries to be affected as required by the Mekong River Agreement.

At that time, Laos said it did not consult countries in the area because the hydropower project is not located on the mainstream of the river, Quang said, adding that this explanation then faced reactions from relevant countries.

In June 2014, Laos admitted that the project is located on the river’s mainstream and began consultations with countries in the area.

As the 6-month consultation duration is about to end, there are less opportunities for experts to express their concerns in relation to this project, Quang said.

At that time, many countries requested that Laos halt the project for further consideration, Laos still build the dam, Quang said.

“So far about 30 percent of the construction of the Xayaburi dam has been completed,” Quang added.

If the Sahong Don dam is built, it will seriously affect Vietnam’s agricultural production, according to the Vietnam Rivers Network (VRN) said.

The dam will cause reduction of alluvium, making soil exhausted and thereby decreasing productivity of rice and other crops, VRN said.

At the same time, such impacts will increase expenses on cultivation, fertilizer, and epidemic control, according to the organization.

Ms. Nguy Thi Khanh, a member of the VRN, commented that the largest benefits from the Sahong Don dam project would belong to the project’s investor, not Lao people.

Meanwhile, the dam will cause great and irreparable losses to Vietnam’s Mekong Delta region, Khanh said.

Nguyen Huu Thien, former chief consultant on environmental impact assessment for dams on the Mekong mainstream, said that the Don Sahong will have adverse impact on aquatic resources of the entire basin, as the dam is located on the Laos-Cambodia border, imperceptibly creating a “bottleneck” that blocks annual migratory fish flows.

Ngo Thuan Khiet, an expert at the Vietnam Union of Science and Technology Associations, warned that the Mekong Delta is suffering impacts from the sea level rise, so if the dam blocks the river current in dried seasons, this will cause a saltwater intrusion to farming land.

The area of land in the Mekong Delta has been estimated to decrease by 5 percent due to saltwater intrusion, so the issue here is to persuade Laos to take measures to minimize such damage, Khiet said.

Dr. Dao Trong Tu, director of the Center for Sustainable Development of Water Resources and Adaptation to Climate Change, said that in dried seasons, up to 50 percent of the volume of water of the river flows through the dam, as stated in the project’s environmental impact assessment.

Accordingly, the dam can keep hundreds of millions of cubic meters of water per day, causing exhaustion to the river’s downstream area, Dr. Tu said.

Currently, in addition to the Don Sahong dam, whose plan of construction has been announced, and the Xayaburi dam, which is under construction, seven other dams are also planned to be built on the river in the future, Dr. Tu said.

Meanwhile, China has completed the building of six dams on the river, and Cambodia is planning to build two dams on it.