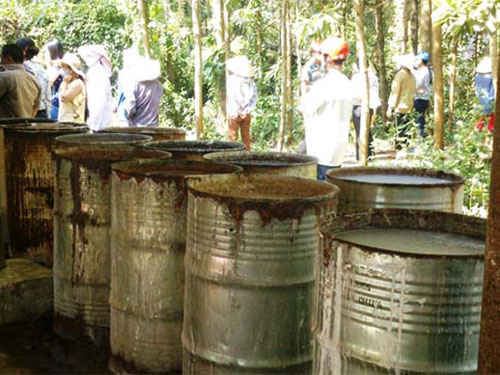 It is the unreasonable legal framework which has made the environment pollution in industrial zones (IZ) and export processing zones more serious.

The barrels of toxic chemicals buried by Nicotex Thanh Thai under the earth.

According to Dr. Vo Thanh Thu from the HCM City Economics University, who conducted a state’s research work on the development of industrial zones in Vietnam, 289 IZs have been licensed, but only 184 have become operational. The IZ investors have been trying to attract investment at any costs, while they do not pay appropriate attention to the environment protection.

PanNature, or the People and Nature Reconciliation center, which conducted a survey in northern IZs, discovered the serious pollution caused by production factories.

In Tang Loong IZ in Lao Cai province, though the phosphate plant seriously polluted the nearby area, 69 households still have not been relocated. Since the day the factory became operational, local people have suffered the bone-and-joint diseases, while more and more buffalos and cows have died.

Bui Manh Hung, a National Assembly’s Deputy from Binh Phuoc province, said the local people many times complained about the bad odors and pollution, but competent agencies affirmed that the indexes were within the safety line.

Especially, local people complained that their houses got cracked due to the mine detonation in the nearby stone exploitation site. However, the competent agencies still affirmed that the vibration was within the allowed level.

Environment-related disputes on the rise

A senior official of the Vinh Long provincial IZ Management Board noted that in many cases, consultancy firms could anticipate the negative impacts the projects will have on the environment, but they did not tell the truth, just because the local authorities showed their strong determination to develop IZ to attract as much investment as possible.

Nguyen Van Hau from the HCM City Bar Association has noted that the higher environment degradation level has led to the sharp increase in the number of the disputes relating to the environment.

The problem is that the waste discharged by industrial factories has affected people’s livelihood. In many cases, local people raised lawsuits against the producers for damages. Vedan, Sonadezi Long Thanh in Dong Nai province and Tung Kuang in Hai Phong City were once the defendants.

Hau stressed that while the pollution is so obvious, which can be seen with naked eyes, competent agencies still deliberately close their eyes.

Both the Hanoi and Thanh Hoa provincial Bar Association have agreed to give legal support in the lawsuit, while the Environment and Natural Resources Institute has agreed to take land and water samples for testing.

“We are awaiting the document from the Thanh Hoa provincial people’s committee on the issue. However, things seem to be stuck because of the creepy silence of the local authorities,” Hau said.