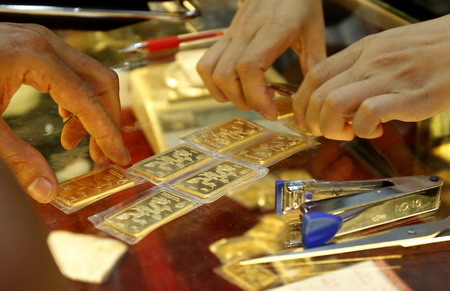 Mining companies worry that digging up Vietnam will no longer be as profitable.

In an unprecedented move, three foreign embassies have jointly urged Vietnam’s legislature not to approve a government proposal to increase royalties on minerals mined in the country out of fear it would hurt companies’ profits.

Gold bars are counted before given to a customer at a gold shop in Hanoi. Vietnam’s legislature has put off the hike in royalty rates on gold to 17 percent from the current 15 percent after three foreign embassies said it would hurt companies’ profits. PHOTO: REUTERS

According to a joint letter read out aloud at a meeting of the National Assembly’s Standing Committee on October 12, the embassies of Canada, Australia, and New Zealand said the proposed hikes in mining royalties will affect the investment climate in Vietnam and the country’s ongoing negotiations on the Trans-Pacific Partnership, an ambitious US-led free trade agreement.

The national legislature yielded to the pressure, shelving the planned increases and asking the Ministry of Finance, which put forth the proposal, to reconsider them.

At the October 12 meeting, house leaders expressed concerns that the hike in royalty rates on gold to 17 percent from the current 15 percent would have a bearing on foreign investment. The house returned the proposal, which also sought to increase the royalty rates on other key minerals, to the Ministry of Finance for “further consideration”.

“We need to tread very carefully on this issue,” house speaker Nguyen Sinh Hung said at the meeting.

The ball now is in the court of Prime Minister Nguyen Tan Dung, who will review the issue and consult with the National Assembly. His say on the matter will likely sway the legislature to vote one way or the other.

Royalty payment is a unique feature of the extractive industries. It is not tax paid on profits earned from minerals but the price that mining companies must pay for the minerals if they want to take them out of the ground.

This was the second time in three months the nation’s legislative body had deferred voting on the hikes in mineral royalties.

In August, it also rejected a government proposal to increase the royalty rate on gold to 22 percent. The Ministry of Finance then adjusted the rate to 17 percent but still, a number of businesses, foreign trade associations and embassies have vehemently objected to it.

The three embassies declined to reveal the full content of the letter when contacted by Vietweek, but their position appeared to be in line with a letter sent last July to the ministries of Finance and Planning and Investment by the Vietnam Business Forum, a consortium of international and local business associations and chambers of commerce.

“The existing mining legislation in Vietnam and the fiscal regime to which miners are subject already causes foreign investors to rank Vietnam as one of the worst places in the world in which to invest in the industry,” the letter said.

“These proposed royalties will not improve investors’ perception and provide further evidence that investors cannot trust the Vietnamese government to maintain a stable fiscal regime once they have committed investment to projects,” it said.

Canary in the hole?

Foreign gold producers have welcomed the decision to put off the royalty hikes.

“We… see it as a positive step for the growth of a sustainable mining industry in Vietnam and a positive signal to foreign investors,” David Seton, Chairman of Besra Gold Inc, told Vietweek. The company runs the Bong Mieu and Phuoc Son mines in central Vietnam.

But Vietnam is not the only country thinking about increasing mining royalties this time. Elsewhere in the world, Canada’s Quebec, Western Australia, and India also have plans to do so.

A study in India indicates that miners have been making “substantial profits” and recommends increases in royalties of key minerals.

The ministry has defended the move by saying it would help deter the already dire hemorrhage of natural resources in the country.

Geologists believe that Vietnam has substantial reserves of minerals such as iron ore, coal, copper, bauxite, gold and zinc.

In the past, foreign mining companies operating in Vietnam have warned that they would pull out investment and go elsewhere in the region because of the government’s tinkering with the tax and royalty regime.

“By way of comparison, we have a major project in East Malaysia in which we will be investing over the next three years. There we have a 0 percent royalty and half the corporate income tax rates of Vietnam,” Seton said.

Experts say it is no surprise that companies and their embassies are so resentful against such increase in mining royalties.

“The reaction from companies and mining lobby groups is the same, including threats to close mines,” said Trinh Le Nguyen, executive director of People and Nature Reconciliation, one of Vietnam’s few locally based conservation groups.

“Nevertheless, if the government of Vietnam plans to hike the royalties, they should keep in mind the principle of ‘no surprise’ to consult the industry carefully,” Nguyen said.

Gold producers blame their dissatisfaction on Vietnam’s knee-jerk tax regime and often threaten to pull out of the country. They say the government has in the past signed 25-year contracts with companies only to “unilaterally change” the contracts every ten years or so to hike royalties.

But experts say the most recent proposed royalty increases are still within the framework defined by the 2009 Law on Royalties, which “companies are obviously well aware for their business plan development,” Nguyen said.

Vietnam will slash corporate income tax to 22 percent from the current 25 percent from January 1 next year. The country plans to bring it down further to 20 percent in the 2016-2020 period.

At the end of the day, in the case of economic downturn, the mining industry and the government can negotiate tax cuts or other measures, experts say.

“But again, the industry should not lump royalties with taxes,” Nguyen said.