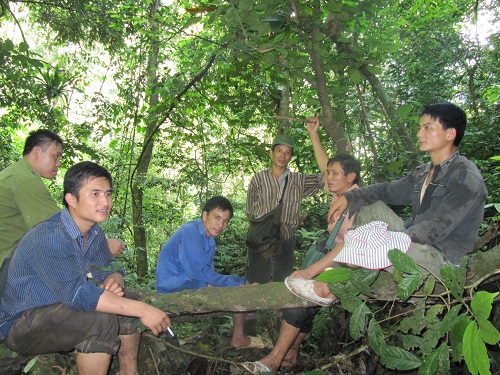 The duties of communal rangers are stipulated in the Article 13, Decree 119/2006/N?-CP dated16 October 2006 of the Government on the organizational structure and operation of forest rangers. Accordingly, with their rights and obligations, the main duties of rangers are: advising the Chairmen of Communal People’s Committees to implement the state management functions in terms of forest protection plans; build public teams for forest protection; educate, instruct and motivate the community of villages to develop and implement laws as well as regulation1 on forest protection; check, detect, prevent and promptly resolve violations of the law on forest protection under their power and in compliance with legal regulations. As a focal point to promote and support the local government and community to implement policies and laws on forest protection, local rangers have been identified as an indispensable factor in national parks/reserve in developing and implementing the model of special use forest co-management such as the model implemented by PanNature from 2010 to 2013 Ngoc Son Nature Reserve-NgoLuong, Hoa Binh Province.

Special use forest system (SUF) of Viet Nam has a history of over 50 years of development, but the introduction of “co-management” has recently officially provided in the policies of the State2. Since 2010, PanNature in cooperation with FFI – Viet Nam and Ngoc Son Ngo Luong Nature Reserve Authority has tested the model of SUF co-management with local community in 05 villages of 04 communes in the buffer (Ngoc Son, Ngoc Lau and Ngo Luong) through the establishment and operation of self-managed boards. The implementation process in areas that rangers are important factors connected with the Management Board and government to rural community and to develop mechanisms for coordination and action management, security forests at the base.

After checking, it is found that local rangers play an important role in connecting the authority of reserve to local authority and community to develop policies and action plans for co-management of forest resources.

Each buffer zone of the Ngoc Son – Ngo Luong Reserve has 3-4 local rangers in charge of coordinating with communal people’s committees for the enforcement of the law on forest protection and management, especially preventing illegal logging and transportation as well as forest land encroachment. Other tasks such as community education and mobilization, building public teams for forest protection have not been commenced because reliable relationships with the community have not been established due to frequent conflicts of access and use of forest with local people frequent. However, the role of local rangers has been positively changed when they have been assigned to take steps to establish co-management regime with villages.

(i) Motivating local authority (communes, villages) to support and cooperate in area monitoring, provide information and advise the co-management of special use forests (through self-managed forestry group established by communal peoples’ committees);

(ii) Organizing negotiations between villages and reserve’s authority and local authority to make coordination and commitments and plans; specify rights and obligation of the community in terms of forest management and protection;

Results of motivating the community and communal people’s committees to establish pilot selfmanaged forestry group at village level in Ngoc Son Ngo Luong come from the process of learning and changing perceptions of local rangers of reserve of the position of the people in forest protection, their relationships with reserve and cooperation methods in reality. During this period, local rangers have coordinated closely with communal rangers, village leaders and officials of PanNature project to organize many meetings at village level in various communication forms in order to raise the people’s awareness and motivate them to participate in forest protection. Through such activities, local rangers also learn the needs of village community to ensure their livelihood and protect forests. On the basis of shared goals and interests as well as reserve’s mission, discussions at village level has come to an agreement to establish a selfmanaged forestry group at village level to govern and connect households involved in forest protection. On this basis, local rangers advised the communal people’s committee and reserve’s authority to establish and recognize the role of the selfmanaged forestry group at village level to deploy the next steps of comanagement.

The negotiations on making coordination commitments and plans: In this period, local rangers continue to coordinate with projects and communal rangers to discuss with the self-managed forestry group at village level and the community for commitments forest protection, including behaviors allowed or prohibited toward special use forest under the current law. These commitments also specify the obligations of the community, the self-managed forestry group, local rangers, reserve’s authority and local authority in forest protection.

Accordingly, local rangers also instruct the members of the self-managed forestry group in making detailed patrolling plans in the boundary between reserve and villages. At the same time, local rangers also support the self-managed proposal of small sponsor package for income generation as agreed with the community, then submit to the reserve’s authority and communal people’s committees for approval and disbursement.

Support to implement small grant packages for villages: The small grant packages of the project (valued 55 million VND / village) are primarily invested in agricultural production (growing corn) as proposed by the community. Upon the approval of the reserve’s authority for these sponsor packages, local rangers are responsible for coordinating with the project’s staff and the self-managed forestry group to support the disbursement and performance monitoring, ensuring that packages are used for the right purposes and increasing the cohesion of the community to the agreements on forest protection. One of the important priorities is that local rangers need to ensure that information on sponsor packages and spending are transparent to local community and local authorities during implementation. Pilot results in Ngoc Son – Ngo Luong prove the appropriate investment, efficient production of households, and the value of the grant packages are withdrawn by the self-managed committee to continue supporting the following farming seasons.

In short, initial results of pilot co-management of special use forests at Ngoc Son-Ngo Luong Reserve prove the key role of local rangers in deployment the model after implementation direction and conditions are approved by the Reserve’s authority and managers. This role is shown during the process of propaganda, advice, agreement and joint actions of local rangers with local leaders, the community through the self-managed forestry group at village level and staff of such projects as FFI and PanNature. This is the process of learning among relevant parties at local level. Therefore, in order to effectively instruct, motivate activities for special use forest protection at local level, local rangers should improve their qualifications and positively intensify the relationship with local authority and community, especially information exchange and coordination with the community for forest protection.

The article was on FSSP Newsletter Vol.40-41 and published by The Forest Sector Support Program on July 2013.