The Outstanding Service in Wildlife Protection Awards Ceremony, held at the Hilton Hanoi Opera hotel, recognized three law enforcement officers and two journalists, who were selected from more than 60 nominations received during 2012.

A panel of judges with representatives from the U.S. Embassy, ENV, International Union for the Conservation of Nature (IUCN), People and Nature Reconciliation (PanNature), TRAFFIC, and Wildlife Conservation Society (WCS) selected the five award winners:

“We are very proud to recognize these five individuals today,” said Ms. Vu Thi Quyen, Executive Director and Founder of ENV. “On any given day, the situation in Vietnam can look rather bleak for wildlife, but these award winners are some of our most valuable partners in the movement forward towards a better future for Vietnam’s wildlife. It is important that we show our appreciation for their efforts, for their dedication and commitment to making a difference, and for helping to transform the way we protect our rich natural heritage.”

US Embassy’s Deputy Chief of Mission, Ms. Claire Pierangelo, the ceremony’s guest of honor, praised the efforts of the award winners. “There is no quick fix for wildlife conservation,” she said. “But by working together, we – government, the international community, civil society, and individuals like today’s award winners – can protect Vietnam’s wildlife and eliminate the demand for trafficked goods.” 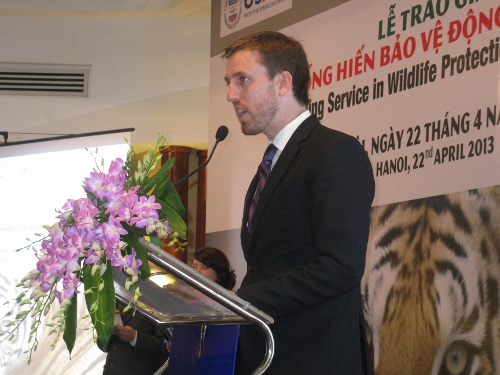