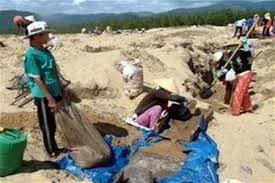 The whole land strip in the central region, which is believed to possess big tourism potentials with beautiful beaches, has been damaged by the mineral exploitation activities.

For the last many years, central region’s people have been nourishing the dream of getting rich from titanium exploitation.

Titanium is a very important material in the aviation and cosmology industry. Titanium and its products have become more and more expensive in the last 10 years.

The latest report of the Vietnam General Department of Geology and Minerals showed that a huge titanium source in the red sand layer, estimated at 200 million tons of heavy minerals, has been found in the south of the central region, from Ninh Thuan to Ba Ria – Vung Tau province.

The latest optimistic estimates say the reserves could be 650 million tons, a huge number if noting that the total titanium reserves all over the world are just 1,400 million tons.

The figures have made people hope that Vietnam would become a “titanium power.”

However, Pham Quang Tu, MA, Deputy Head of CODE, a development consultancy institute, stressed that the figure was just the predicted reserves, while it does not mean the figure Vietnam can exploit and sell for money.

“One must not entertain the illusion about the huge titanium reserves. It may happen that Vietnam can only exploit titanium in the areas with easy exploitation conditions, while the remaining would still be in earth’s crust forever, or they would be exploited, but have no economic value,” Tu said.

Hurrying to exploit titanium for sale for money

CODE and PanNature, which once conducted a survey in Binh Dinh province, the locality with the largest-scale titanium exploitation on the black sand layer, met a Chinese language interpreter, who did the marketing for a Chinese enterprise specializing in collecting titanium to export to China.

The interpreter said that the Chinese enterprise would buy all the titanium to be offered to it.

The Binh Dinh provincial authorities granted 36 licenses to enterprises, allowing to exploit titanium on an area of 656 hectares. Meanwhile, the Ministry of Natural Resources and the Environment granted 7 licenses.

On March 19, 2013, the People’s Committee of Ninh Thuan, the neighboring province of Binh Dinh, granted a license to Vinaminco Ninh Thuan, allowing the enterprise to exploit titanium on the area of 1,200 hectares in Thuan Nam district.

On the central beaches, titanium exploitation sites have mushroomed. It’s too easy to get titanium from the black sand layer. According to Dr Dang Trung Thuan, in Binh Dinh province, ore can be found just several meters beneath the sand layer.

The large-scale uncontrollable titanium exploitation has damaged a lot of beaches in the central region.