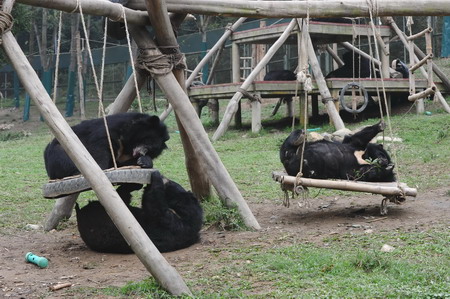 Vietnam’s sole bear sanctuary, facing eviction on spurious grounds allegedly cooked up in a corruption-ridden land dispute, has got the Prime Minister’s backing to stay put in a move that has surprised many.

Activists see it as a welcome, rare victory for conservation in the country, but are not confident this heralds an era where conservation efforts would prevail over vested interests.

The Tam Dao Bear Rescue Center will be allowed to sustain its operations and continue with the project to expand the bear sanctuary in Tam Dao National Park in Vinh Phuc Province, about 42 miles north of Hanoi, a government decision said Tuesday (January 15).

As late as last October, the Ministry of Agriculture and Rural Development had told Animals Asia, the Hong Kong-based animal welfare group running the US$2-million center, that the sanctuary should close down and move elsewhere if it can.

Conservationists did not have much hope that Prime Minister Nguyen Tan Dung, who had the final say over the fate of the center, would act contrary to the advice of the agriculture ministry, and the decision has been a cause for cheer.

“I’m surprised by the outcome because we didn’t expect this kind of decision,” said Tuan Bendixsen, the Vietnam director of Animals Asia.

“This is a very significant decision that shows Vietnam is very committed to conservation and to saving the bears,” Bendixsen told Vietweek.

The agriculture ministry had ordered the center’s eviction following a July conclusion by the Ministry of Defense, which said that the expansion of the center, currently home to 104 Asiatic black bears rescued from Vietnamese farms and illegal wildlife trading, would affect national defense work in the area.

But conservationists dismissed this rationale as having no basis in reality.

Animals Asia said evicting the center would spell doom for the mental and physical well-being of the bears, leaving over 70 Vietnamese staff jobless and compromising the nation’s commitment to conservation safeguards.

The charity group set up the center in 2005, when the agriculture ministry issued a directive on phasing out bear farming, a vocation notorious for the extraction of bear bile (sold mostly to Korean and Chinese visitors).

Those who sell bear bile extract it regularly in an agonizing procedure for the animals. The bile is used in traditional medicine. Usually, between 100-120ml is withdrawn at a time and sold for between $3 and $6 per milliliter.

Around 3,500 bears are being farmed in Vietnam, concentrated mostly in the north. Vietnam, China and South Korea are the only three countries in the world to legalize bear farming.

Conservationists have praised the sanctuary as one of the most successful conservation models in Vietnam.

The government directive also asked that the agriculture ministry “verify the responsibility of the director of Tam Dao Park in…implementing regulations on the [bear sanctuary] project.” Any violations found must be dealt with seriously in accordance with the law, it said.

It is not clear if any action is being taken against the director, Do Dinh Tien.

“All I can say now is that everything will be carried out in accordance with the procedures,” said Ha Cong Tuan, deputy agriculture minister.

Animals Asia had accused Tien of aggressively lobbying the defense ministry to evict the sanctuary to give way for a hotel project planned by Truong Giang Company, of which his daughter is listed as a founding member.

“For the last year and a half, we have faced a lot of barriers and things that the Tam Dao Park director placed to close the project,” Bendixsen said.

“This is basically one man who tried to destroy the project for his own benefit.”

Tien, who has dismissed all the allegations of cronyism and corruption leveled against him, said he was not aware of the PM’s decision when reached by Vietweek on the day it was issued.

But he said this move did not surprise him at all.

“Now we will just have to do what we are told to do. I’ll answer all the questions brought to the table,” he said.

In November, the Associated Press quoted documents it had obtained as saying that Truong Giang Company had asked Tien for permission to lease 48 hectares of land in Tam Dao for an “ecological tourism and entertainment project.”

Truong Giang’s registration papers list Tien’s daughter, Do Thi Ngan, as one of its major shareholders, a document obtained by Vietweek showed.

But in an indication that other mysteries remain in the case, Ngan flatly rejected this.

“There is no such company,” Ngan told Vietweek.

She said she had quit her job as an administrative assistant at the bear sanctuary this month, unable to bear the hostility of her co-workers.

“I just have no idea about the dispute. I don’t know (anything) about my father’s business either,” she said.

“The thing is the closure of the center would have also made me jobless.”

Activists say the dispute over the bear sanctuary is a vivid example of how conservation efforts are undermined by people with vested interests in Vietnam. They say that when developers want the land, power and money do the talking and environmental conservation has no chance of winning.

In Vietnam, “all too often, it seems the voices who are heard with regard to the trade-offs only seem to be the well-connected, politically powerful, or rich people, and the benefits of the trade-offs seem to accrue to those powerful and wealthy people as well,” said Pam McElwee, an assistant professor of human ecology at Rutgers University with extensive research experience in Vietnam’s protected areas.

All land in Vietnam is owned by the state. But because land-use rights are not always clear or protected, they remain a “super-lucrative” commodity sought by vested interest groups who put business benefits before anything else, experts say.

Vietnam’s legal system incorporates a large number of globally accepted principles on environmentally sustainable management, and it is one of the few countries with a biodiversity law, a World Bank report said in 2010.

But in practice, such provisions are minor considerations in land use and infrastructure-planning decisions, it added.

Given that Vietnam’s current growth trajectory does not hold out much hope for conservation efforts, the Tam Dao sanctuary decision is likely to be a-flash-in-the-pan victory, experts say.

“It is too early to say if this marks a trend,” said Jake Brunner, program coordinator for Vietnam with the International Union for Conservation of Nature.

Observers say the bear sanctuary had been spared eviction because the evidence in favor of its continued operation was “so compelling.”

It is clear that strong public advocacy has played a crucial role in the case, they add.

Faced with the prospect of closing the center, Animals Asia had mounted a public relations campaign against the eviction, enlisting widespread support from international politicians to British celebrities. A number of conservation groups, foreign embassies in Vietnam, and US politicians sent a letter to PM Dung, urging him to not close the sanctuary.

“Who knows if other similar cases will be able to gain such momentum?” said Nguyen, the Vietnamese conservationist.

“Vietnam has plenty of such cases and they all have remained unknown to the public.”