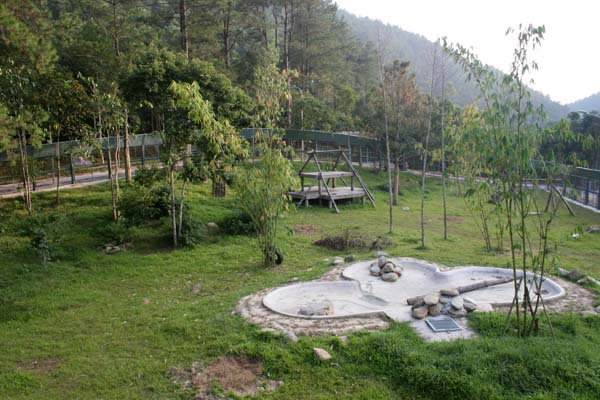 Bears, some of them blinded or maimed, play behind tall green fences like children at school recess. Rescued from Asia’s bear bile trade, they were brought to live in this lush national park, but now they may need saving once more.

The future of the bears’ sanctuary has been in doubt since July, when a vice defense minister ordered the nonprofit group operating the $2 million center not to expand further and to find another location. U.S. politicians and officials in other countries are among those urging the military to back off.

The defense official wrote, without elaborating, that the Chat Dau Valley is of strategic military interest, but environmentalists allege that vested interests have urged an eviction. They point to documents showing that the daughter of the park’s director is involved in a proposed ecotourism venture that wants to lease park land.

Vietnamese laws adhere to international environmental standards, but in practice are “minor considerations” in land-use and infrastructure-planning decisions, the World Bank said in a report last year.

Vietnam is among the most biologically diverse countries on earth, comprising less than 1 percent of the world’s land but about 10 percent of its species. But the report noted that its protected areas are suffering from deforestation and habitat loss.

“It doesn’t matter if the forests are protected by law or not,” said Trinh Le Nguyen, executive director of People and Nature Reconciliation, one of Vietnam’s few locally based conservation groups. If officials and community groups are not vocal enough, “then the private sector will try (to get) wealthier and wealthier.”

Conservationists cite the example of northern Ba Be National Park, where pollution from ore mining is said to threaten a freshwater lake that has received accolades from an international environmental convention. Scientists and hundreds of residents have protested that the pollution is causing the lake’s water quality to deteriorate, state media reported last year. A local Communist Party official also has called for a probe into what the state-run Vietnam News Agency calls “rampant deforestation” by loggers inside the park.

Elsewhere, a proposal to develop two hydropower plants in Cat Tien National Park in the south has triggered opposition because the dams would inundate forests.

“It took generations to establish and maintain our national parks,” said former park director Tran Van Thanh, who is calling for the proposal to be scrapped. “It would be a waste if we have to surrender parts of our forests for economic development.”

Vietnam first established protected lands in the 1960s, and the network has grown to include 30 national parks and scores of other protected areas spanning forests and wetlands. But experts say local development agendas often trump larger conservation goals as officials sell off protected territory for mines, hydropower dams and infrastructure or real estate projects.

Tensions between conservation and development have only increased over the last decade in Vietnam. Land developers have become wealthy, powerful and ambitious on the back of rapid economic growth. Protected areas are typically under the control of local officials, who receive little funding for conservation and view the areas as potential sources of revenue.

“Vietnam is at a real crossroads where it has to make some hard decisions about whether or not it values biodiversity conservation,” said Pamela McElwee, a professor of human ecology at Rutgers University who conducts research in Vietnam’s protected areas. “The majority of folks working in the protected-area system are genuinely dedicated … but they’re facing really powerful interests.”

Vietnam’s poor enforcement of environmental laws is adding to international criticism of its ruling Communist Party, which is castigated for its human rights record and its handling of a sagging economy.

They were alarmed by Vice Defense Minister Do Ba Ty’s July letter to the Ministry of Agriculture and Rural Development. He directed the center not to expand further and to find an alternate site in partnership with local officials. He wrote that the Chat Dau Valley is of “strategic importance to national defense.”

“The expansion of the bear rescue center in this valley will have direct impact on military projects,” the letter said, according to a copy given to the Associated Press by the sanctuary’s nonprofit operator, Hong Kong-based Animals Asia Foundation. The letter did not explain why the land was of strategic importance.

Seven Democratic U.S. representatives urged Dung to protect the sanctuary in a Nov. 5 letter. “The claim that the land is an area of national defense significance is questionable,” they said, noting that the bear center has operated since 2005 and the park has welcomed tourism since 1996. The lead signer was Rep. Sam Farr of California.

Animals Asia says an eviction would leave 104 rescued bears homeless and waste its $2 million investment, which was funded entirely by international foundations, corporations and private donors. It says after an initial trial period, the prime minister in 2008 approved its plan to build facilities on about 11 hectares (27 acres) inside the roughly 39,000-hectare park, and that the center has so far expanded to half those 11 hectares.

The group rescued bears that were being used to produce bear bile, which has historically been used in China and other Asian countries to treat fevers, pain, inflammation and other ailments. Bears are typically captured in forests and transported to farms, where the green bile is sucked from their gall bladders in a painful process that sometimes kills them.

In recent weeks, Animals Asia has waged a public relations campaign alleging park director Do Dinh Tien has a personal stake in an ecotourism venture proposed for the park by the Hanoi company Truong Giang Group.

Animals Asia’s Vietnam director, Tuan Bendixsen, said he believes the ecotourism project would be built on the undeveloped half of the bear center’s 11 hectares. Documents show the company in March sent a team of surveyors to evaluate that parcel and other park land for development.

“He wants to take half the land, and he can’t get it, and that’s why he’s creating all this trouble for us,” Bendixsen said of the park director.

In September 2011, Do Dinh Tien asked the agriculture ministry to approve separate plans by three companies, including Truong Giang, to develop ecotourism in Tam Dao’s national park, according to documents given to the AP.

Documents show that days earlier, Truong Giang had asked Tien for permission to lease 48 hectares of land in Tam Dao for an “ecological tourism and entertainment project.” Truong Giang’s registration papers list Tien’s daughter, Do Thi Ngan, as one of its four shareholders.

Ngan and officials at the agriculture and defense ministries declined to comment.

In an interview, Tien declined to discuss his daughter’s relationship to the company, saying he has not yet discussed the matter with her. But he insisted he has never lobbied for the company’s interests.

“From my perspective, the bear center can go ahead if it follows procedures,” Tien said recently at park headquarters. “But I can’t speak for the Ministry of Defense.”

State media say the agriculture ministry is working with the central government to resolve the dispute. The prime minister has final say over the bear center’s fate.

“It would do harm to our country’s image,” he said.