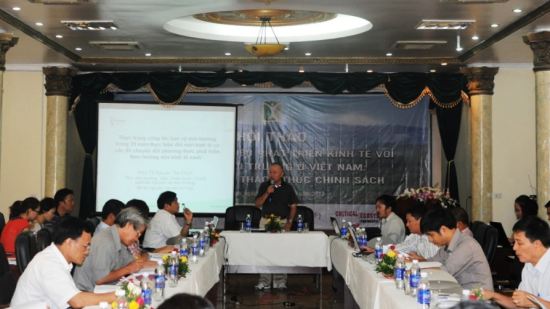 The comment was made at a recent workshop on harmonising economic development and environmental protection held in the northern province of Ninh Binh by PanNature, a non-profit organisation focused on bio-diversity conservation.

The seminar aimed to create a floor for scientists and experts to raise opinions about the environment.

Dr Nguyen The Chinh, deputy head of the Institute of Natural Resources and Environment Strategy and Policy Planning, pointed out that Viet Nam was using more natural resources to reach its economic targets.

Chinh made a comparison that if GDP growth in 1990 was at level 1, it had climbed to level 3.5 in 17 years. However, water and power consumption doubled while land usage increased by 1.5 times.

Statistics from the Ministry of Natural Resources and Environment revealed that from 2002-09, the country lost 1,000ha of mangrove forests each year.

Solid waste also was not collected and processed properly.

Dr Nguyen Manh Ha from Ha Noi National University’s Centre for Natural Resources and Environment Research said that Viet Nam used to be known as a small country with diversified biology, but now it was known for environmental damage.

He also expressed his concerns over the construction of hydroelectric power plants which he blamed for the disappearance of many forests and wild animals.

To Xuan Phuc from the US-based Forest Trends said that forest protection was also an issue since Viet Nam was one of leading exporters of timber and wooden products. His figures showed that each year, Viet Nam exported 5-6million cubic metres of timber.

Most participants shared the view that assessing the environmental impacts of a project was vital to protecting it. However, Nguyen Khac Kinh, vice chairman of the Viet Nam Association for Environment Impact Assessment, admitted the work had not been taken seriously.

He also criticised a policy that permitted investors to hire a company to appraise their projects.

“It’s understandable that investors will hire companies that will provide them with a ‘green’ report,” he said.